Without Russia, Belarus is nothing 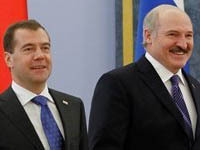 Alexander Lukashenko won the presidential election in Belarus a year ago. On has to admit that the year 2011 was not an easy one for Belarus and its never-changing leader. In a nutshell, the depressing state of affairs in the county as pictured by the critics of the "Belarusian economic miracle" looks as follows.

At the end of summer, the government decided to send the national currency plummeting. As a result, one US dollar now costs 8,500 Belarusian rubles, which is nearly three times as much as a year ago. The inflation rate in Belarus made up 104 percent instead of the scheduled eight percent during eleven months of 2011 (the rate was 10 percent in 2010).

From the financial point of view, this is a catastrophe. The devaluation of the Belarusian ruble cut the average monthly Belarusian wages of $500 in the beginning of 2011 to $230 by the end of 2011. It does not mean, though, that the living standard in Belarus has dropped twice in less than six months.

To estimate the living standard in any country, one needs to know the exchange rate of local currencies vs. foreign currencies. It is also important to take account of the cost of living in a certain country and the amount of priority expenditure. For example, a family income of $1,000 a month for, let's say, Ukraine, is more than the average level. For Qatar, Lichtenstein or the USA, average families will not be able to make their ends meet with this money.

Ukraine's example is indicative for many causes. The Ukrainian national currency was devalued by 80-90 percent at the end of 2008. The reduction of the GDP made up the record-setting 16 percent (which is not 80 percent, of course).

The results of the year 2011 will appear in the beginning of 2012, so one will have an opportunity to analyze the scale of the collapse of the Belarusian economic miracle. If the GDP of Belarus rolls back to the level of Kazakhstan, it will be possible to consider it a correction. If it tumbles down to Ukraine's level (twice), it would mean that Lukashenko and his team experienced the economic collapse, the consequences of which will last for years.

The reasons for the avalanche-like devaluation of the Belarusian currency include: the growth of fuel prices, the global economic setback and even Belarus's membership in the Customs Union. Foreign analysts explain the devaluation of the Belarusian ruble with the considerable growth of salaries in the country (the salaries were raised after the presidential vote in 2010).

Previously, Belarus used to receive nearly 20 million tons of crude from Russia. The price, at which Russia would sell the raw material to Belarus, would be considerably lower than the international market cost. Belarus would use as much as 6 million tons of fuel for internal needs and process the remaining volume at modernized Belarusian refineries. Afterwards, the high-quality products of those refineries would then be sold to Europe.

The terms for the delivery of the Russian crude to Belarus changed last year. Belarus now pays the privileged price for 6 million tons. The remaining 14 million tons are available at international prices. The new conditions have made the export of petroleum products to the West unprofitable for Belarus. Lukashenko tried to find cheaper oil in Venezuela and Azerbaijan, although to no avail. The country has thus lost a considerable source of income.

In connection with the scheduled growth of customs duties on foreign made cars within the scope of the creation of the Customs Union, the Belarusians rushed to purchase foreign currency. Many people did so in a hope to buy a car before July 1. This factor triggered the disappearance of foreign currency in the country. This can be observed from the growth of the external deficit.

In some cases, the devalued national currency becomes a considerable competitive advantage in foreign trade. The USA has been criticizing Japan for using this trick for years. Not so long ago, the United States asked China to strengthen the yuan. However, to win success for the strategy of the undervalued currency, one needs to have own rather than imported resources. If that is not possible, then export volumes are supposed to be much larger than the volumes of the critically essential imports.

Let's take a look at the structure of the foreign trade of Belarus. The export of the country returned $25.35 billion in 2010, whereas the imports made up $34.47 billion. It may seem at first sight, especially if one takes account of the Belarusian GDP of $55 billion, that the country is actively involved in international trade. However, Belarus's primary export partners are Russia (39%), Holland (11%) and Ukraine (10%). As for imports, the main partners of the country are Russia (52%), Germany (7%), Ukraine ($5.5) and China (5%). Thus, Russia has more than a half of the Belarusian imports - presumably fuel resources. Belarus exports a half of its export production on the Russian market too.

Moscow thus controls two levels which directly affect the well-being of its neighbor: fuel prices and the openness of the Russian market for Belarusian goods. Needless to say that the Kremlin officials resist the temptation of pulling one of the levels taking into consideration Mr. Lukashenko's temper.

At the same time, one of those levels becomes weaker with the creation of the Customs Union. The rules of commodity circulation become more and more predictable. The positive dynamics in building mutually beneficial relations between the members of integration processes on post-Soviet space may attract new partners and vice versa.

As for the deliveries of the Russian natural gas, Belarus does not receive the blue fuel at Russia's internal prices. Still, Minsk enjoys a considerable "integration" discount for it. In addition, it became known on December 16th that Russia and Belarus were going to introduce a new price formation formula for Russian oil shipments. The new protocol is valid through 2015.

In 2012, Russia will deliver 21.5 million tons of oil, which will be 3.5 million tons more than in 2011. Such record-setting delivery volumes give every reason to believe that the countries have already found a formula of mutually beneficial cooperation in the field.

Well, we can only observe the development of the economic situation in Belarus. It will be possible to come to first conclusions when they expose the results of the year 2011. If Russia and Belarus maintain their ties on a high level, Belarus will have all chances to come out of the crisis. Otherwise, the future of the country is gloomy and joyless.