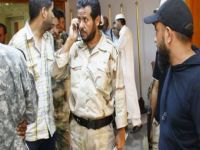 When Empress Catherine II visited the Crimea in 1787, Russian minister Grigory Potemkin created hollow facades of non-existent villages along the desolate banks of the Dnieper River in order to fool and impress the monarch with fake conquests, trying to enhance his standing in the empress' eyes.

Similarly, today the CNT in Libya, also called the "rabble rat council" by locals, is trying to fool and impress the world with fake conquests, erecting hollow facades of non-existent law and order, peace and prosperity in post-Gaddafi Libya. Nothing could be further from the truth.

While the western press either keeps silent about the current state of affairs in Libya or dutifully reports what the NATO propaganda machine dictates, the Resistance Fighters of Green Libya have started their own media networks underground, transmitting regular frontline news to the world via Algeria ISP in French.

Resistance Fighters are gradually taking over and have killed many foreign imposed CNT members, hoisted green flags in major towns and reinstated the former Jamahiriya TV in Tripoli.

Here are the latest detailed reports from December 27, 2011 to January 6, 2012. They show that the CNT is losing ground and had a rather disappointing New Year's Eve.

Benghazi: In this eastern city of Libya near the Egyptian border, through which foreign mercenaries were infiltrated to start riots, the local Resistance Fighters attacked the hotel Tibesti and killed five CNT members.

Darna, Sabrata, Zonara: In these three towns the local CNT councils were forced to demission. Their offices were ransacked.

Khoms: The CNT building was exploded, Muammar slogans and pictures painted on the remaining walls.

Laejilate: Heavy fighting is going on between Resistance and CNT.

Sabha: The Resistance fighters attacked a CNT arms depot at the periphery and seized all arms, the local CNT commander was shot.

Sirte: In Muammar Gaddafi's birthplace a Green Resistance cell has formed, "Thaer Sirte". One of their snipers shot the local CNT commander of Sirte.

South of Libya: The CNT confirms that Libya's South is not under its control any more. The south of the Libyan Sahara is Touareg country. The Touareg tribes have sworn oaths of loyalty to Guide Gaddafi. They are honest and upright people, not to be swayed or bought with a handful of dollars. The Touareg tribesmen are great fighters and entirely committed to liberating Green Libya from foreign invaders.

Tripoli: The capital and crown of Libya. It is the scene of violent clashes between Resistance and CNT. Many CNT members have been maimed or killed, their bodies hanging from balconies on display for the crowds.

The citizens of Tripoli are demonstrating in the streets, wearing green clothes, waving green flags, shouting "Allah, Muammar, Libya O Bess" and "Yes, yes, yes ... Muammar lives." Rumors are running that Muammar Gaddafi is alive and organizing the Resistance from a safe underground location. Tripoli citizens are carrying portraits showing Muammar as Lion of the Desert, while traitor Mustafa Abdel Jalil is depicted as rat.

Algeria: Aisha Gaddafi, Muammar's daughter, who currently resides in Algerian exile, sent a message of encouragement to the Libyan people via Dr. Hamza Touhai. She plans to take over and continue TV Rai, since its former location in Damascus/Syria had to be closed.

Those western spectators who are able to look behind the new Potemkin facades will witness that the Great Socialist Jamahiriya is slowly but surely rising out of the ashes and rubble left by NATO bombs. Green Libya will bloom and blossom greener than ever.