Why Brazil is the 6th largest economy in the world 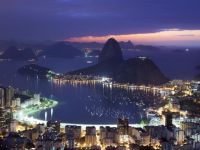 With a heated domestic market, the increased real purchasing power of Brazilians, improvement programs, income support and families with high economic vulnerability, taking millions of Brazilians out of poverty and the enjoying contribution of more than 31 million Brazilians who in last decade joined the middle class, the country has celebrated 19 new millionaires per day since 2007 with projections to continue until 2014, according to a report published by Forbes, and Brazil currently has 137,000 millionaires and 30 billionaires.

The Brazilian economic phenomenon brought surprises to the international economy in 2003, when Goldman Sachs predicted that Brazil would surpass Italy in 2025, and France and leave behind only the United Kingdom in 2035. The reality has changed with the international economic crisis that began in 2008, came to Italy in 2010, the United Kingdom in 2011, France probably between 2,013 to 2,014, Germany until 2020. Brazil's GDP in this decade will be in front of the GDP of all countries of Europe, in ranking per country.

With economic growth, according to the Ministry of Foreign Affairs in June 2011, there were 1,466,000 foreigners in good standing residing in Brazil. The country became one of the main routes of foreign direct investment totaling U.S. $65 billion in 2010, according to the Central Bank. The reduction of 2 to 0% of the Tax on Financial Operations (IOF) levied on foreign capital investment in venture capital funds, will stimulate the attraction of long-term investment to Brazil.

The variables of this success are: strong and regulated financial system, expanding housing market, improvement of the creative economy, increasing commodity prices in the international market, increased real purchasing power, with policies to encourage consumption and income growth, enhancement of national currency; competent technical economic team, incentives to entrepreneurship, low level of indebtedness of private companies, technical improvement of the agricultural system of agribusiness and manufacturing; expansion of savings, such as the volume of consortia; political stability, increasing access to college and technical education in the last decade, diversification and incentives for technological development projects, including nanotechnology and others, investment in infrastructure - GAP (Growth Acceleration Programme), increased perception of the international automotive industry for the economic potential of Brazil, attracting tens of billions in direct investments; expansion of oil reserves discovered, with pre-salt and recovery of the Brazilian naval industry to meet this growing demand, as well as new investments in the Brazilian petroleum industry, combined with the entrepreneurship of many Brazilian and foreign entrepreneurs in the country, these are the factors that are leading Brazil to become an economic powerhouse.

There are challenges to be conquered such as an improvement in per capita income, improved health management (one example: the country has 0.9 nurses for every group of 1,000 people, while in Iceland there are 15 for each group of 1,000 people, many cities lack physicians), expansion of basic infrastructure; delay of investments with the management of transportation in the country, improving education, increasing investment in scientific research, improving support for cultural projects; qualify public manpower in many of the municipalities, among others.

Brazil deserves respect, but some actions can help to further leverage the Brazilian economy, including new investments in the creative economy, in the eco-sustainable economy, in addition to improving institutional relations with international organizations, scientific and educational exchanges; improvement in relations with international chambers of commerce, a critical view of city management, improvement in the educational system at all levels and encouraging social entrepreneurship in the country. These will make Brazil a reference in the socioeconomic development of this decade.