Since Egypt became a State Army 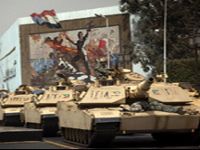 The Egyptian army has symbolic powers, historical, political and economic powers with an unusual reach, became the backbone of the country in a state within a state and in a group of major economic powers in the world. Egypt is in fact a State Army. Among industries, banking, tourism, agriculture, new technologies and building stock, the Egyptian army controls 25% of the GDP of the country.

The Egyptian army has symbolic powers, historical, political and economic powers with an unusual reach, that became the backbone of the country in a state within a state and in a group of major economic powers in the world. Egypt is in fact a State Army.

Last January, in open revolt in Tahrir Square, the army was hailed as a hero by protesters because of their deceptive position of neutrality during the fall of the Mubarak dictatorship. Ten months later, things have changed and it is the army, particularly the Supreme Council of the Armed Forces, who run the country since last February, which is the object of repudiation of the population.

The military passed through the Revolution, but was not spared the transition: their efforts to conserve power and gigantic economic treasure had cornered the armed forces in a fatal contradiction.

After the coup d'etat of 1952, which ended the power of King Farouk, Egyptian presidents all came out of the ranks of the army, Nasser, Sadat and Mubarak were officers. However, it was deposed Hosny Mubarak, to ensure the loyalty of the troops, that the military handled the management of a massive treasure: between industries, banking, tourism, agriculture, new technologies and stock on property, the Egyptian army controls 25% of GDP (GDP) of the country.

Never far from national disasters, the United States completed the view. The credits that Washington gave the armed forces of Egypt after the signing of the Camp David accords in 1972 total 1.3 billion dollars annually. With this amount, the military expanded the range of their investments beyond the scope of defense.

Last year, when Wikileaks released confidential telegrams, U.S. diplomats said the army was in front of "a network of commercial enterprises particularly active in the sectors of water, oil, cement, construction, hospitality, distribution of fuel and a large housing stock in the Nile delta and the Red Sea coast."

With this "savings," there is nothing strange in the fact that the military played all their cards to retain their benefits. Its originality comes from a chapter of history. Subjected to a Western embargo and having the former Soviet Union help Egypt modernize its army, Nasser set up a very effective national military industry.

The Egyptian military manufactures ammunition, small arms, tanks, planes, boats and guns, and sells it very successfully to the Gulf countries and Africa. Arms sales abroad represent an average of one billion dollars.

By itself, the military industry accounts for 12% of jobs available in the country. According to estimates by Western diplomats, the Egyptian Army enterprise has a business volume estimated at 5.5 billion dollars per year.

Twelve percent of the national jobs correspond specifically to the military industry. If other sectors are added, the army and its business derivatives represented 30% of national employment.

Up-to-the-minute technologies, fishing, electronics, food processing industry, road infrastructure, building - there are sectors where the armed forces are not present. The Army is the first property owner in Cairo, the first builder of roads and houses, the first beekeeper, producer of olive oil and shirts, pots, computer products, toys and even bread. They also distributes medicines and intervene in the food processing market when prices of wheat or flour provoke social tensions.

In short, besides being a political actor in the foreground, the military is an inevitable economic partner. Everything seems to indicate that they are willing to leave political power and organize a transition, but without giving up the management of their immense riches and thus lose historical privileges.