Iran will not give up nuclear plans says Ahmadinejad 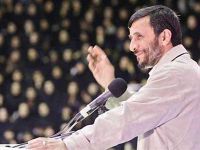 On Wednesday, Iranian President Mahmoud Ahmadinejad said in a speech broadcast live on state television, that Iran will not retreat from its nuclear program, despite new Western sanctions.

"I advise you to abandon these methods (sanctions). Do not believe that such a bad mood, this show of tooth and nails, will divert the Iranian people on their way to nuclear technology," said Ahmadinejad in Pakdasht, a city east of Tehran, where he reiterated that Iran does not want nuclear weapons.

The day before, Iran had already condemned the new economic sanctions announced by the United States, Britain and other Western countries over its nuclear program and considered them of "no effect," according to a spokesman for the Iranian Foreign Ministry.

"These actions follow in the direction of a sense of hostility against our people in these countries. They are reprehensible and without effect," said a spokesman for the Foreign Ministry, Ramin Mehmanparast, citing in particular the United States and Britain.

These sanctions were announced after a recent report by the International Atomic Energy Agency (IAEA) that reinforces the suspicion of a "possible military dimension" of the Iranian nuclear program. Iran has rejected the new IAEA report saying its nuclear program has only peaceful purposes.

A decree of the White House hardens reprisals against people or companies that provide material support or resources for the development of the oil and petrochemical industry in Iran. The United Kingdom announced hours before the breaking of all contacts with Iranian banks, while Canada announced the "virtual" blockade of all transactions with the country.

France also proposed on Monday that countries like Germany, USA, Japan and Canada "immediately" freeze the assets of Iranian banks and disrupt purchases of Iranian oil, to convince Iran to renounce its nuclear weapons program, according to a letter released by the French presidency.

On Wednesday (23rd), China warned that Western sanctions against Iran will only aggravate the scenario and increase confrontation on the issue of Tehran's nuclear program. "China has long opposed unilateral sanctions against Iran," said a spokesman for the Chinese Ministry of Foreign Affairs, Liu Weimin, in the first comment from Beijing after measures to punish Tehran were announced.