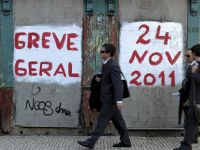 Thursday November 24 saw Portugal paralysed in a massive general strike against the absurd austerity measures already imposed by the Troika and a further draconian wave of cuts in the 2012 State Budget which will stretch Portuguese society to breaking point. This was approved by the same two political parties which have mismanaged Portugal since 1974.

The PSD (Social Democrats, right) and PS (Socialist Party, right) have a lot of explaining to do in Portugal, for these are the two parties which the people have stubbornly voted into power in every election since the Revolution in 1974, these are the parties which have wholly and totally mismanaged Portugal's economy and finances since the process to adhere to the (then) European Economic Community and the ensuing years which saw billions pouring into Portugal for development programmes.

Or were they development programmes? The Prime Minister of the time, Aníbal Silva, used soundbites such as "The Progress of the Portuguese People in the European Economic Space", which sounded great but at the same time he sat in a position of power for ten years from 1985 to 1995 during which Portuguese farmers were paid not to produce, the Portuguese industrial sector was financed to close down and the Portuguese fishermen were financed to allow the Spanish fishing fleet to come into Portuguese waters.

The same Silva, these days substituting these soundbites with others such as the cows of the Azores islands are smiling at him, is in his second term in the Presidency of Portugal, after having used the expression "I have a certain idea for Portugal" in his first campaign. In a way, Silva's second Presidency is a type of divine justice since it culminates in the logical conclusion of the policies he presided over thirty years ago.

This is not to say President Silva is corrupt. Honest, yes; well-meaning, for sure; industrious, certainly; preoccupied with his country, no doubt...corrupt he is not but he is the father of political mismanagement and incompetence, a ludicrous figure who uses the mists of Sebastianism to create an aura he does not have.... He is one of those cases that looks good but ruins everything when he starts "power-blinking" (an idiosyncratic habit of blinking profusely to portray the notion that the subject is intelligent) or opening his mouth.

The tragedy of Silva, and all the governments which have dug Portugal's grave deeper since he went into the political wilderness to disassociate himself from his beloved PSD, is that they were all more in touch with the Eurocrats, willing to be "a good student" and congratulating themselves every time that Brussels threw a new pocketful of ECUs and later Euros in Portugal's direction than in league with policies to contradict Portugal's natural and endemic geopolitical and economic reality.

And, correct me if I am wrong, that reality was frozen for thirty years during which Portugal received the Euro Miracle's zillions. When it suddenly dried up, Portugal went back to being what it had always threatened to be, namely a non-viable state without its Empire (Angola, Cape Verde, Guinea-Bissau, Mozambique, São Tomé and Príncipe, East Timor and formerly, Brazil). Was Portugal prepared to enter the European Community? Was Portugal prepared to enter the Eurozone?

I would say not, without the help of the then PM Mário Soares' "mon ami Miterrand" in the first case and in the second, Guterres' monumental goodwill and Barroso's political ambition which in both cases were accentuated.

It could have worked, if Portugal had had the guts to stand up to the European Community and later European Union, playing the CPLP space (8 Portuguese-speaking countries) and surfing the Euro space together without antagonism but showing leadership...but then again how do you show leadership when many of those in the Assembly (Parliament) are...what we see today?

It could have worked, but it didn't. Portugal decided instead to use the old boy network, pretend that everything was going well, while as generations of (in) competent  (?) and corrupt self-seekers feathered their own nests at the expense of the people and the State, while governments and hundreds of thousands of civil servants presided over the greatest shipwreck in the history of the planet, not for a few weeks, but during decades, hiding figures and reality and selling out Portugal's economy to foreign interests, destroying the job opportunities for future generations.

This Gangster Government mentality, which was so vehemently contested when a British MEP in Thatcher's time labelled the Portuguese as "mafiosos" has led Portugal to where it is today. Solutions? The Portuguese political opposition has been speaking about these for decades but what difference does it make? The people always vote for the same two parties, studies in incompetence. Every people has the Government it deserves, someone said.

Today's strike marks the necessary presence of those who feel angry at having their salaries docked, their holiday and Christmas subsidy taken away (despite having fulfilled each and every clause of the contract of citizenship), pensions reduced, job security threatened and the future of their children placed in question. It does not solve anything...indeed, what about those who paid for their transportation passes and see one day of services taken away from them?... but it makes a statement.

This is the result of four decades of incompetence and criminal mismanagement of the country. Maybe eventually the Portuguese people will consider listening to the political parties which have not been privy to this situation? Dream on...

In conclusion, some ideas:

*Investigate all those who have been in positions of economic and financial control since 1974, check where their wealth came from and confiscate it if the origin is dubious. I predict that so many millions would be found that there would be no need at all for the current "crisis"

*Put police on the street and stop closing police stations

*Reopen the frontiers and police them properly. Why is Portugal full of Romanian, Albanian and Bosnian thieves?

*Tell the people where their taxes are going. "If we need to build a new school, we need to borrow". ?? Then where the hell do the taxes go to?

*Do not say there is no money available, for when it is about saving a bank, or bankers, trillions suddenly materialise

*Empower police and the justice system. I reserve the right to kick the living shit out of anyone who threatens my personal integrity and shall do so. What about the defenceless old lady?

*Consider telling everyone loud and clear "We are bankrupt because this system imposed upon us is OK for Germany but not for us. OK where is our German salary? No German salary? No conditions imposed by Germany, Adiós, Adieu, Auf Wiedersehen, Goodbye! We are not paying"

*Export more and import less, use the CPLP space better, create conditions for the free movement of people and goods within this space. What many Portuguese do not realise is that there are far more Portuguese in Angola than Angolans in Portugal, the same being true for Brazil

*Instead of wasting funds on ridiculous ventures such as the Orthographic Agreement, a very good way to destroy the language, use synergies to create wealth inside the Lusospace

*Start getting used to the idea that the measures implemented by the PSD/CDS Government and the Troika are creating the conditions for a free-fall in the economy in future years, are guaranteeing that Portugal will never, ever be able to dig itself out of this hole and all they are doing in their ludicrous measures in taking money out of the economy is delaying for a few months the inevitable: Portugal has not been viable unless it has been receiving massive hand-outs or else siphoning off wealth from overseas possessions.

This does not mean Portugal is not viable or cannot be. But that is not why the Portuguese are on strike today.