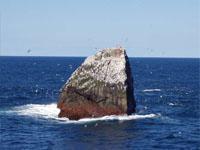 A fight over a tiny rock Rockall is unfolding In the North Atlantic. It is claimed by the United Kingdom, Ireland, Iceland and Denmark. It is unlikely that a piece of land with the area of ​​570 square meters would have caused such an interest if it had not been for the oil found under it. Now the UN will decide who will be the proud owner of the "Golden Rock".

Rockall is the above-water area of the once-extinct volcano. There had never been fresh water there, hence, it was not livable. The only inhabitants of the island are guillemots, northern cormorants and other birds that stop at Rockall during their long flights. Some birds even build their nests on the cliff. At the same time there is plenty of fish and shellfish in the surrounding waters. The possession of seafood is another reason to fight for this area.

Rockall is referenced in Irish medieval folklore. There, it presents a mythical stone "Rocabarra" which should appear before the doomsday. As for the scientific description of the rock, it was fist mentioned in 1703 by a Scot Martin Martin. He also pointed to the existence of the Irish legend of the "Rocabarra."

Centuries went by, and Rockall acquired a reputation of a deadly place. For example, in 1686 a fishing boat was stranded in its vicinity.  In 1812 a research ship "Leonidas" sank near it, and 12 years later - brigantine "Helen of Dundee." In 1904, near Rockall "Norway" ship crashed on its way to New York. Then 635 people were killed and 150 managed to escape.

No one was in a hurry to formalize the sovereignty over the ill-fated rock. Hardly anyone could resist the mistress of the seas, England , especially considering that Rockall lies not far from the British shores. But the British did not do so until 1955, when its officers arrived on the island and installed the UK flag and navigational beacons. In 1972 the accession of Rockall to the Scottish community Harris was announced.

Since then, however, the lighthouses broke down, but no one dared to take the flag off. The British did not take particular care of the rock and even choose not to register their rights to Rockall through the UN. They reinforced the sovereignty in strange ways. In 1975 two Marines came here for a photo shoot for a couple of hours. 10 years later, a retired British soldier lived on Rockall in a wooden box screwed to the rock for six weeks.

The first people to encroach British sovereignty over the islands were the activists of "Greenpeace". Three environmentalists settled on the island for 42 days to protest the British oil exploration ongoing in this area. Representatives of the "Greenpeace" declared the island "a new global state of "Waveland". Anyone could become its national. The political circus, however, did not last long.

Rockall would have remained either formally British, or nobody's if the scientists had not begun to study the shelf around the rock to see if there was oil there. The oil was found, and, according to British experts, it may replenish the treasury of the United Kingdom by 100 billion pounds. It seems that there are also gas fields. Then other countries began to fuss.

Ireland, Iceland and Denmark have decided to challenge the British right to explore the mineral resources and marine fishery near Rockall. Icelanders and the Irish made a corresponding claim in the relevant commission of the UN. The United Kingdom followed the suit. Denmark joined the claim as well. It is expected to formalize all the documents by 2014.

Each side has their own arguments. Britain claims that the nearest territory to Rockall area is the island of Hirt located at the north-west coast of Scotland. It is 300 kilometers away from Rockall, while Ireland, Iceland and the Faroe Islands that belong to Denmark lie a little further. The English believe the rock to be an island; hence all the waters around it are to become the exclusive economic zone of the UK.

In contrast to the neighbors, Ireland is trying to prove that the Rockall is not an island but a rock. Under the international law, there can be no territorial waters around the rock. This means that the shelf shall be shared based on the distance from the shores of a country. The Irish claim that Rockall is the closest to their country. The coast of the UK is further, and the island of Hirt formally related to Scotland should not be taken into account.

Denmark has the weakest position in this dispute. The main part of the country is far away, and it can "cling" to Rockall only through the possession of the Faroe Islands located to the north of the rock. The Danes claim that there is an underwater micro-continent "Faroe Islands - Rockall Plateau." If so, then Denmark can claim not only the shelf near the Faroe Islands, but also near Rockall.

In turn, Iceland has little interest in the ownership of the rock. The northerners are fighting only for the delineation of an underwater shelf near it so that they can claim a piece. Icelanders began working on the preparation of their application to the UN back in 2001, and were the first ones to file. In addition, it was Island that initiated negotiations on the controversial issue, and therefore, perhaps, the UN will appreciate its amicability.

The negotiations have been ongoing for five years now, but a compromise has not been reached. Denmark, Iceland and Ireland periodically discuss this issue without the participation of the UK, but there is no united front against the British. The situation would hardly escalate to a war. However, no one wants to share the oil and seafood. Rockall has the potential to become a new arena of international dispute that would unlikely be resolved without the participation of the UN.