USA uses Australia to make China play by the rules 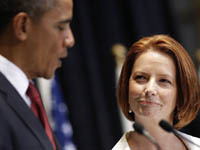 The USA intends to use the ANZUS Treaty (Australia, New Zealand and the USA) against China. Barack Obama visited Australia's capital Canberra to mark the 60th anniversary of the alliance. Obama met Australian Prime Minister Julia Gillard and agreed to considerably strengthen the defense cooperation with the country. Particularly, it goes about a tenfold increase of the US military presence on the green continent.

The leaders of the two countries said that the United States would not have a special army base on the territory of Australia. Nevertheless, they acknowledged that the deployment of US military men in the north of Australia and the increase of the US naval presence in the region will virtually turn Darwin, the capital of the Northern Territory, into the center of constant presence of the US Armed Forces in Australia.

The US contingent will increase from 200 to 2,500 people. Strategic bombers B-52, F/A-18 fighter jets, as well as C-17 cargo planes and fuel aircraft will also be deployed on the green continent. All of them are going to be deployed at Australia's Tindal air base. As a result, the US presence in Australia will become the largest since the end of WWII.

The deployment of the US Armed Forces in Australia will take place gradually, for six years. The first group of 250 US marines will arrive on the green continent already in 2012.

China reacted immediately to Obama's remarks. An official spokesperson for China's Foreign Ministry stated that such an increase of the military presence and the expansion of the defense cooperation did not seem to meet the interest of the countries of the Asian-Pacific region.

Chinese officials stated that China supports the peaceful development and cooperation in the Asia-Pacific region. Other countries should not act differently. "When developing state-to-state relations, one should take into account the interests of other countries as well as the whole region, and peace and stability of the region," Liu Weimin, an official spokesman for China's Foreign Ministry said.

A week ago, Western media published the concept of the actions of US forces in case of an armed conflict with China. The concept stipulated a possibility for conducting combat actions on the Chinese territory, including attacks on China's inland areas, as well as massive cyber attacks and the neutralization of China's anti-satellite weapons. The concept made many US experts draw parallels with the period of the Cold War against the USSR.

By 2016, the combat abilities of Chinese Navy will be able to conduct efficient operations near the territories of Japan, New Guinea and Indonesia. This may touch upon Australia's sphere of influence. China needs to defend its economy, which largely depends on the shipments of oil from the Middle East. This region is extremely important for the United States as well.

It is worthy of note that Australia is only one of the USA's strategic partners, with whom Washington intends to contain China's growing influence. The United States intends to use the Philippines, Japan and India for the same purpose. Maybe Washington will change its relations with Vietnam too.