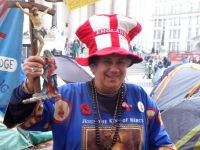 "My Christian name means I am a freeman," said Carl, as he sat chatting to me outside his tent below the steps of St. Paul's Cathedral in London. "Yet I have been homeless for twelve years."

As he spoke to me last Thursday, I looked around at the protest camp with its vast number of tents that protestors had erected since the middle of October. One sign read 'Turn capitalism into compost.'

"If you open up a dictionary and look up the word 'system'," he continued, "it defines it as something that works. Well this does system does not work. It's a jungle."

As I write, the conflict is coming to a potential clash at St. Paul's. The protestors have been served with eviction notices which expect them to remove their tents by 6pm tonight, Thursday 17 November 2011.

In October, the London group had initially intended to occupy Paternoster Square, where the stock exchange headquarters is located. Nearby is also the UK base for Goldman Sachs. However the police pre-empted the protestors by sealing off the square and they instead took over a section of St Paul's, part of which is owned by the church and part by the Corporation of London, which administers the City district.

The camp is situated on a public highway along the northern side of the Cathedral. Although European laws protect the right to peaceful protest, blocking public roads is illegal under the 1980 Highways Act. I could see no restrictions of access to any one, the tents giving way to much of the paving area.

Within the camp, activists have set up kitchens, a library, technology facilities, mobile toilets, a full range of recycling bins and a media centre. They continue to seek to maintain good relations with officials at St Paul's cathedral. A big sign states: 'No alcohol or drugs allowed on the site' and it has been agreed that no graffiti or sign is to be respectively daubed on or attached to the cathedral.

The anti-capitalist camp grew even bigger last weekend when old veterans, disgusted by the way soldiers are treated after wars are over, put up their tents and in so doing obstructed a service. They were not impressed by the cant and hypocrisy of Remembrance Sunday.

I entered the kitchen tent. I offered to pay for beautifully cooked vegetable samosas, but I was told politely and forcefully they were free; I could have as many as I liked. Enjoying two, I walked up the steps of the cathedral which was full of tourists, observers, mobile phone and professional looking photographers and a couple of protestors dancing in motley clothes.

Because of the protests, Cathedral authorities closed the cathedral for the first time since 1940. During the blitz its doors had closed for four days because of an unexploded bomb scare in the southwest tower.

The recent cathedral closure cost £16,000 a day in lost revenue, and left worshippers to organise improvised services on the street outside. The closure by the cathedral's authorities added injury to insult when it was justified on modern grounds of health and safety. Yet the public was asking, 'If that was true, why did it reopen days later?'

The apparent antipathy of the Cathedral to the protestors - who are apparently complaining about the same money lenders that Jesus Christ had thrown out of his 'Father's house' - had caused much division in the Anglican Church. The Church of England - much like the British Liberal Democrats - is never keen to admit it is an amalgam of both left and right with extremities of both.

Some Christians believe it is the Church of England's duty to show concern about the unbridled form of capitalism that stalks the world today, especially as the church has a centuries-old tradition of offering sanctuary to those escaping persecution.

Reverend Marcus Ramshaw from York said, "The Church should have invited the protesters to set up their tents inside the cathedral. That's certainly what Jesus would have done."

As a result of the such deep conflict, together with managerial dillydallying, the bells have tolled for many clerics in the past few weeks. The clerk of the works, Martin Fletcher collapsed from stress after giving the initial advice for St Paul's to close. Dr Giles Fraser resigned from the governing Chapter, claiming that by backing the City of London Corporation's legal bid to evict the protesters, St Paul's was "on a course of action which could lead to violence in the name of the Church". Part-time chaplain Fraser Dyer suffered and finally Right Reverend Graeme Knowles resigned from his role as dean of St Paul's, declaring his position there as "untenable."

Back in October, British Trade unionists gave their backing to the protestors with the following statement. "As trade unionists we express our support and admiration for the activists taking part in the occupation at St Paul's. We believe that they deserve the support of all those who think that we need a fairer and more just society. The occupiers represent the rage against the bankers and a government that puts the interests of the rich before the interests of ordinary people. We welcome the occupation's statement giving support to the public sector pensions strike on 30th November."

I talked to another protestor. He explains: "I am here because of the inspiration and the veneration I have for the gallant people who are doing their utmost to create a fair and more just society, not only in England but throughout the world." This was middle aged John, who had once been a lawyer.

This whole protest is an offspring of the Occupy Wall Street movement which encapsulates the message that 99% of the world are poor and 1% of the world are rich which is WRONG and that most banks and financial organisations have become corrupted on a global scale. This movement, started by American activists, now spreads in various forms to 82 countries, motivating tens of thousands around the world to show their frustration and anger. Is it estimated that 3000 people have been involved in the London protes

"I am very wary of reporters," John continued. "We had the Daily Mail around here, pretending to be sympathetic to our cause and they wrote filth about us and put it on the front page. Isn't that outrageous? And that's coming from a newspaper who appeased Hitler."

"I have been in nearly every country of the world working for charity," said 71 year old protestor, Catholic nun, Sister Ruth. "After 40 years I came back with bad legs for treatment and I was shocked and horrified at how England has sunk so low. And America is even worse! Some people here have become so greedy, so selfish, so corrupt, so dishonest. I can't believe how the bankers caused a worldwide financial collapse by gambling with our customers' money. We paid our tax money in billions to rescue them and all they are doing now is giving themselves salaries of eight million pounds a year, with one million pound bonuses, that is obscene! That's why I am here."

Sister Ruth (pictured above) is a headline-grabbing nun who has travelled the world to over 200 countries, working with charities and children. She has become well known for carrying a three foot Madonna with her wherever she goes.

And what did I think? As it said on one of their signs: "The banks got bailed out, we got sold out."