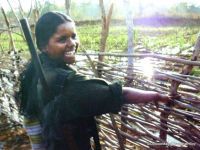 Arundhati Roy wrote a brilliant essay last March which was published in Outlook magazine about her experience of spending many days and nights in the company of mostly young folks in the deep forests of Dandakaranya in the Dantewada region of Chattisgarh State.

The young folks I am referring to are the tribal lots who have been living here since the beginning of time. This vast forest area has been their home, but sadly ignored by its protectors, the elected governments and the selected officials.

Their pristine home has been repeatedly ravaged, protesting men folk killed, their young women raped, entire villages brutalised and wiped out by armed forces. Why have these terrible episodes repeated over the decades with no end in sight that would provide solace or justice to these dwellers of these forests? It is the so-called progress whose primary aim is to bring in mining and other industries. But it would force these indigenous people to be displaced permanently from their ancestral homes.

Not too long back a mining conglomerate called Vedanta Corporation that is based in the UK tried their hands at starting a Bauxite mine at the Niyamgiri Hills of Odisha. This raised an uproar along the length and breadth of the country and even overseas since the project endangered many species of wildlife, would eliminate the existence of many rivers and an entire forest area would've disappeared if the project had succeeded. To top it all, many thousands of tribal residents would have been permanently displaced or simply put, made homeless.

Fortunately, there was a man at the Centre, Jairam Ramesh, who was the minister in charge. He saw the truth of the devastation this project would've brought about, went ahead and cancelled the license of Vedanta Corp to operate this mine. By the way, this man Ramesh was shunted out recently, obviously by corporate pressure on the government at the centre and replaced by a person who apparently is friendlier to ventures that can make inroads into the deep and timeless forests of Central India.

This does not augur well for these tribal populations. They have been at the receiving end of a system that has provided nothing but injustice to them for decades. Prior to 1947, colonial masters called the British Thugs ruled over these children of the soil with an iron fist and an armed rebellion started way back then. It has continued against exploiting land owners, the Zamindars, the money lenders and now against an establishment that is aiming its well oiled guns at these hapless folks for dissent.

'Operation Green Hunt' was launched, though un-officially by the Home Minister Chidambaram against these tribal folks who have been forced to take up arms in defence of their survival. This Operation consists of sending central paramilitary forces to combat the 'menace' caused by these forest dwellers. According to the ruling coalition at the centre, the areas infested by Maoists need to be cleaned out. According to Oxford dictionary 'infestation' means an area that is covered by contagious pests like bacteria etc.

So do these beautiful people of the forests who number in a few millions fall into this category? Of course not! And all the so-called Maoists are not tribals and not all tribals are Maoists!. The distinct line that divides this has been deliberately overlooked by overzealous armed forces it seems.

By the way Chidambaram before entering politics was a corporate lawyer who had represented Vedanta, Enron amongst others and has earned a fortune by doing so.

It is not a new phenomenon for these tribals to take up arms against the exploiters who enter their home territory by force. As mentioned earlier, this has been going since the British Raj era. It is only since last few decades the rebellious folks have earned the names of being Naxalites or Maoists.

In the year 1950, the government at the centre tragically passed a law that brought these forests under State custody thereby ratifying a colonial era law. This was a big blow for the tribals to become more marginalized and isolated. The law made them squatters or refugees in their own homelands. It denied them the traditional rights to forest produce and in the process criminalized them if they tried, say to till their own land for cultivation.

Rich and powerful landthe owners with political connections and help of the police force have been trying to give death blows to these innocent children of the soil. Naxalism grew out of this as an antagonist force in the villages of Bengal. Now the names may get mixed up with Naxals/Maoists etc.

But it is a rebellion brought about by the brutal and greedy powers who want to exploit the rich resources of the forests. The resources are so rich, especially in mining operations in these areas, where it is officially acknowledged that for every tonne of iron ore mined by a company, the government gets a paltry Royalty of Rs 27 while the mining company makes Rs 5000!!.

So where does that leave the original inhabitants of these lands? Nowhere since they get forcibly displaced with a pittance of an amount or no compensation at all. This brings forced migration upon them to urban areas to eke out a living. That means if the corporations succeed in their venture deep inside these forests, a whole age old lifestyle of these beautiful people of the forest gets changed forever.

Thousands of these tribals have seen death in their struggle against these greedy monsters during the last few decades. Unfortunately, the media being mostly owned by big corporations who have business interests in these lands, do not highlight the plight of these people but highlight it the other way around. That these Maoists are killing machines, ruthless butchers who are determined to overthrow democracy. Democracy for whom, may I ask?

Only for the few elite who live in the 'developed' urban centres of India. To the majority of Indians living in the deep hinterlands, the year 1947 or democracy or elections have absolutely no meaning! For these hinterlands produce one other deadly record. Of deaths! Deaths of children due to malnutrition that by the way is the highest in the world! And the government's contribution to the health sector stands in single digits of its GDP. That is another story to talk about!

Instead of spending hundreds of millions of Rupees on combating these forest dwellers and landless peasants, the same money could just as well be spent on real developmental projects in these areas by the government by constructing a lot more hospitals, health-care centres, schools etc. But who can or who will drill this fact into the minds of the government that is so overwhelmed right now with corporate influence over their policy matters that it is affecting not only these forest dwellers, but us too!

Yes the children belong to these hapless lots who are resisting the evil powers to consume their land. No doubt excesses have been committed by these Maoists too! Many an innocent have been killed suspected to be a police informer. It is an admitted fact, but who started the process and who is continuing the process of exploitation?

The answer is right in front of us, un-acknowledged because most of us don't have the guts to admit it. Yes it is the evil, greedy conglomerates hand in glove with corrupt politicians, corrupt police and paramilitary forces that are creating havoc in the lives of these millions of tribal folks.

If the democracy in India was real, why couldn't these people raise their voices of dissent or protest peacefully? They did try but were forcibly silenced. Forcibly silenced meant their entire villages getting wiped out, men murdered and women raped and their belongings pillaged by armed forces.

To add insult to injury, the government supported armed vigilantes called Salwa Judam, which was trained and armed to carry out carnages in these hamlets deep inside forests. Fortunately, the Supreme Court of India banned it recently, but they are re-grouping with the help of both the State and the Central governments in a new avatar.

Now comes the news that the Indian Army is opening training schools deep inside these forests to train paramilitary forces to fight the Maoists!

The point I am trying to bring about is that we have to look at the whole uprising in these forest hamlets from a different perspective and not from the one which is officially published in the mass media. Of course bottom line is that violence at the end of the day is destructive no doubt and cannot be praised or encouraged or even condoned from either side. But it is the government's responsibility to see justice prevails and here, it has failed in all its misery.

The Prime Minister M.M. Singh called the tribal forks, the Maoists the gravest internal threat to India!. I wonder, as a Prime Minister, has he ever come down to the common man's level to feel his pulse ever? No, he is too busy hobnobbing with corporate honchos and has no time for ordinary souls!

The gravest threat to India are the greedy corporations, the corrupt politicians, the corrupt officialdom that includes the police or the paramilitary forces whose records are not exemplarily clean going by their participation in Nagaland or Mizoram or Manipur or Dantewada, Chattisgarh or Kashmir.

By conducting Operation Green Hunt and other similarly armed operations in various parts of India that include Dantewada or Manipur, the Indian government is waging a war against its own people, no doubt about that. And one of the many reasons for these many brutal assaults are to protect corporate interests, though it is an agenda well hidden from us common folks!

Unless and until these people of the forest and the landless peasants see justice coming their way, the rebellion will continue as it has for many generations now. The Indian government has to recognize them as true citizens of India and not as outsiders and stop criminalizing them. They have to be given their original rights back, given free access to forest produce and give the lands back to them for agriculture or whatever reason that is fit enough.

If not, the government is at the risk of manipulating not just the dwellers of the forests, but at the entire ecosystem which is currently existing on a delicate platform. A platform that can collapse due to the manipulative powers called Corruption, Greed and Corporations!

It is time for the ordinary folks like us to stand in support of these dwellers of ancient forests and not see them as terror mongers through the jaundiced eyes of the mass media and oppose the government's actions such as Operation Green Hunt by either petitioning or writing to the Prime Minister of India and correct him on his stand on the most serious internal security threat to India!