Vitali Klitschko to knock out all Ukrainian politicians 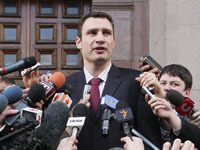 Recently, the leader of UDAR (the Ukrainian Democratic Alliance for Reform) Vitali Klitschko has been manifesting himself at the Ukrainian political arena. This man became famous throughout the world with his excellent strikes with either hand. Now he intends to leave this sport and compete in big politics. But can a boxing star become a political star and send all his rivals in a new field in the knockout?

40-year-old Klitschko, nicknamed "Dr. Iron Fist" is a legend in sport. He was no joke - even before he started as a professional boxer, he was a six times champion in kickboxing. In professional boxing, he won everything - today Vitali and his brother Wladimir own all the belts in the heavyweight champions. In Germany, where he lived and practiced for many years, he is regarded as their own and Germans cheer for the Klitschko brothers as they would for their compatriots. 45 fights, 43 wins, 40 of them - knockouts. This is the track record of Vitali at a boxing ring.

Vitali Klitschko became close to politics long time ago. He and Wladimir had sufficiently close relationship with the former mayor of Kiev Alexander Omelchenko, who attended their fights. When in the fall of 2004 the "orange revolution" took place, Omelchenko and the Klitschko brothers supported Viktor Yushchenko. In November-December of 2004, Vitali and Wladimir repeatedly appeared on the Maidan. During one of his fights Vitali stepped into the ring with an orange ribbon on his shorts, hanging like a tail.

In 2005, Vitali Klitschko was injured and gave up boxing for a few years. Then he decided to try his luck in politics. In March of 2006, he became number one on the list of the electoral bloc "PORA - Party" Reforms and Order "(Pora-PRP), speaking up with quite radical nationalist slogans and calling for Ukraine joining the NATO. Russian-speaking Klitschko who does not speak Ukrainian looked like a black sheep.  The first attempt was unsuccessful: block "Pora-PRP" scored only six percent of the vote and did not make it into the Verkhovna Rada. Then Klitschko tried to become the mayor of Kiev, won nearly 24 percent, but this victory was not enough. Notorious businessman Leonid Chernovetsky became the head of the capital. As a "consolation prize" Klitschko became a deputy of the Kyiv City Council, where he led a faction named after himself.

Klitschko chose not to partake in the early elections to the parliament in the fall of 2007. Speaking in boxing terms, he was preparing for a rematch in Kiev. The champion mercilessly criticized the activities of Chernovetsky, who personally took part in fights with the supporters of the mayor in Kiev City Council. Yet, no one was beat. Vitali fiercely criticized the mayor, but the revenge was not a success. In the spring of 2008, Klitschko lost the mayoral election in Kiev with a "knockout", gaining 18 percent against Chernovetsky's 36.  Incidentally, the conflict between Klitschko and Chernovetsky continues today. Recently, the champion accused the mayor of stealing 70 billion hryvnia, and distributing or selling all assets for a penny. Chernovetsky, who for months does not appear in Kiev, said that he would file a claim against Klitschko. It would be curious to see how the two politicians would fight in court where the official language is Ukrainian which neither of them speaks.

In 2008, Vitali successfully returned to the ring, but did not abandon politics. He decided to use his position as a chair of his fraction in the Kiev city council as a springboard for entering the national stage. During the presidential elections in 2010, he did not support anyone, and in April of last year, he headed the party with the characteristic name UDAR ("blow" in Russian). The organization was founded back in 2005, but Klitschko very harmoniously blended into it for unknown reasons.  Today, UDAR is in opposition to the current government. Klitschko has repeatedly called on Viktor Yanukovych to release Yulia Tymoshenko, unsuccessfully offering to take care of "Lady Y". In August, Klitschko stopped training before his fight with the Pole Tomasz Adamek for the sake of the "case of Tymoshenko," but the fight was not canceled. His rival was sent to a knockout, and Vitali again plunged headlong into politics. Formally UDAR participated in rallies in support of the prime minister, but the Champion was not seen at the rally.

What are the chances that the champion will knock out his political opponents? Director of the Ukrainian branch of the Institute of CIS and Baltic Vladimir Kornilov shared his comments in an interview with "Pravda.ru":  "Currently, Klitschko's team is working effectively enough. UDAR's rating has been increasing in the central regions of Ukraine, especially in Kiev. With proper positioning it can be successful. Its niche is about the same as that of the Bloc of Lytvyn. In the West, they argue for Bandera ideals, in Sevastopol - for the extension of the Russian Black Sea Fleet stay. UDAR is another attempt to create a force that stands above ideology.

At the same time, so far Vitali Klitschko is not a name in politics. During the previous campaigns he was sticking out his boxing victories and, figuratively speaking, was losing through knockouts. He needs to prove that he can work with his head, that he is a serious and thoughtful politician. The numerous blows to the head did not affect him adversely. "

The program of UDAR does not allow saying whether Klitschko is a right or left politician, anti-Russian or pro-Russian. It has many words about the fight against corruption and social justice. On the one hand, the state must have a state language, on the other, the right to use other languages must be guaranteed as well. Joining the EU is called a priority of the foreign policy; however, the relations with Russia are of great importance. It looks like an attempt to take a seat in the center of the Ukrainian political spectrum.

In mid-October Klitschko visited Washington. He met with the fiercest critics of Russia - Republican Senator John McCain and Democrat Benjamin Cardin. In his speech, the boxer said that the priority should be the European integration of Ukraine, and relations with Russia, while important, are secondary. Was it just a desire to please a confirmed Russophobe or does Klitschko want to be the new Yushchenko? The future will tell ...  If we believe the results of the survey, UDAR has a good chance to get into the parliament - even if the entrance barrier is increased from three to five percent. However, the sociology of Ukraine is a fine thing, and local opinion polls are often ordered by one or another political force. They very rarely accurately reflect the preferences of the Ukrainians. In any case, Vitali Klitschko has a chance to get into the parliament.