Republicans desperately try to paint Obama and his wife black 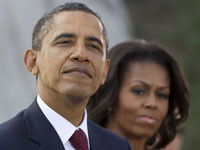 A new political scandal has been gathering pace in the United States against the background of the growing American debt, which caused quite a stir in the world. USA's First Lady is suspected of the  inappropriate spending of state funds.

Judicial Watch public organization that deals with the anti-corruption struggle in the government, counted the spending of Barack Obama's wife, which she made during a short trip to Botswana. The organization concluded that Michele Obama managed to spend as much as $474,000 in just several days. The amount does not include the costs on accommodation and food. The rent of the aircraft, for instance, made up $12,188.

According to JW, most of the trip was not connected to the professional activity of the First Lady. The goal of Michelle Obama's African tour looks rather vague indeed. She visited the Black Continent to encourage the young people of South African Republic and Botswana to take part in public life.

The program particularly stipulated Michelle Obama's participation in safari on the territory of a local national park. She also planned to visit South Africa's ex-President Nelson Mandela. It was also said that the First Lady had the entourage of over 20 people, including her two daughters, mother and nephews.

JW President Tom Fitton stated that the trip to Botswana was a typical example of the inappropriate spending of taxpayers' funds.

"This trip was as much an opportunity for the Obama family to go on a safari as it was a trip to conduct government business," said Fitton.  "This junket wasted tax dollars and the resources of our overextended military.  No wonder we had to sue to pry loose this information."

It just so happens that Mrs. Obama enjoyed her African holiday at the time when the general public was still shocked with her recent "very generous" trip to Spain's Mallorca last year.

Judicial Watch had questions to President Obama and his wife in 2009. The couple spent $11,000 of state funds on restaurant and entertaining events during a regular trip to New York. Spokespeople for the presidential administration said, though, that the numbers were exaggerated. The official report about the trip said that the food on board the plane cost only $928. The money was enough to make nearly 200 dishes for 21 people.

Another scandal, which takes place on the level of the US Congress, is connected with Solyndra, a little-known company, which enjoys the patronage of the presidential administration. The company was founded in 2005 and specialized in the production of high-tech solar batteries. US inventor Chris Gronet assured that the new batteries would be much more efficient and cheaper than the existent analogues.

By 2009, the cost of Solyndra's assets made up $2 billion. The company received guarantees on multi-million-dollar loans from the state, as well as the top-level support. For example, Joe Biden attended the opening of the new facility of the company in Fremont, California.

The state of affairs changed in September 2011. All of a sudden, Solyndra began to cut its personnel and subsequently declared its bankruptcy. The situation raised serious questions about the strange relations between the Obama administration and the owners of the corporation.

To receive financial support from the state in the United States, one has to go through a very complicated procedure. It is an open secret that as many as 100 energy companies have asked for support from the budget. Many of them received no as an answer to their requests. However, Solyndra received a positive response very quickly. The company was not doing very well at that time, whereas the prospects of its development on the market remained rather vague.

Experts believe that the case could be based on corruption. US media outlets published letters from the US administration to audit companies. It was said in those letters that it was necessary to finish all the works as soon as possible to approve the package of financial assistance.

It is worthy of note that there were no official comments made in connection with Solyndra's bankruptcy.

It is not ruled out that the most recent scandals are only a vestige of what may follow before the presidential elections in November 2012. If the US president and his milieu continue to spend taxpayers' money like that, new large scandals will follow next year to undermine Obama's ratings.

The summer holidays of Mrs. Obama do not make a serious scandal which would damage Obama's reputation. However, if the lawyers from the Republican Party continue to work on the Solyndra case, Obama and his followers may face severe problems since it goes about the misuse of $558 million.