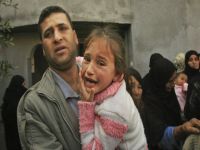 Is NATO using forbidden weaponry in Libya? Below is video footage of what is purported to be attacks using white phosphorous (as it did in Kosovo, as it did in Iraq). The graphic images of the effects upon human beings this horrific substance has are too horrendous for us to place here, but a search will reveal the demonic mindset involved in deploying this substance. But then again with NATO, is anyone really surprised?

The Algerian site Algeria-isp.com has announced that 1,200 civilians have been murdered by NATO in Bani Walid, where prohibited weaponry has been used. One of these weapons is the so-called poor man's atom bomb, namely the FAE bomb, or Fuel Air Explosive, which is a horrific demonic weapon designed to burn all the oxygen in a determined area, suffocating all living beings within its radius of operation. The source says this weapon has been used in Bani Walid, Tarhouna, Khomse, Misrata and Sirte, among other theatres.

This proves quite how desperate NATO is getting as the Libyan Armed Forces, tribal militia and people's committees fight back heroically against the foreign invader and the terrorist scourge it supports - one has only to research the atrocities of these demonic thugs to understand why the Libyan people are fighting so fiercely.

There is also footage of a white phosphorous attack by NATO on the civilians of Bani Walid, while "journalists accompanying Arabic and western news sources have remained quiet about this massacre".

"Any weapon or munition which is primarily designed to set fire to objects or to cause burn injury to persons through the action of flame, heat, or combination thereof, produced by a chemical reaction of a substance delivered on the target" is forbidden under Article 2 of Protocol III of the Convention on Certain Conventional weapons.

Article 2 on "Protection of civilians and civilian objects" states:

It is prohibited in all circumstances to make the civilian population as such, individual civilians or civilian objects the object of attack by incendiary weapons.

It is prohibited in all circumstances to make any military objective located within a concentration of civilians the object of attack by air-delivered incendiary weapons.

Once again, we see the demonic nature of NATO, which perpetrates war crimes almost daily as it supports terrorists, murderers, rapists, arsonists, looters and torturers in Libya to oust the progressive government so that the FUKUS countries (France, UK and US) can get their hands on Libya's resources and set up a base in Africa to recolonise the Continent after Colonel Gaddafi helped to free it.