Europe's kingdom of lazy people to be shattered again 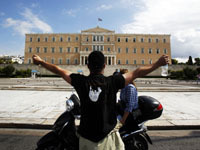 Another nationwide strike will occur in Greece. Public sector workers will be protesting government plans to lay off a "working reserve" up to 30,000 civil servants in exchange for loans of the EU and the IMF. Voting will take place in the Greek parliament in the coming days.

Something similar was observed in Greece a couple of weeks ago. Then the Greek airports canceled hundreds of flights because of a 24-hour strike of public sector employees, including air traffic controllers. Unions in the private sector formally joined the strike, but their participation remained low. In Athens, shops were not closed, and private firms worked in their normal mode.

Such unrests in Greece no longer surprise or scare anyone. In the eyes of many, Greece has become a sort of kingdom of lazy people. In this Mediterranean country where the daily temperatures in summer in Athens each year vary between 28 and 35 degrees Celsius, people are hardly likely to work as efficiently as in, say, Sweden.

It is not surprising that even during the reign of the "black colonels" in the 1970s the Greeks had never forgone their right to arrange prolonged breaks at work. While the sun is high, productivity naturally decreases, and it is time for siesta.

In the good times there are no obstacles to have long siestas. However, many Greeks start work at five or six in the morning and finish at eight or nine in the evening, thus leveling this long siesta.

The labor and trade union movement that came from France and was well accepted in the multi-party political landscape of modern Greece has always added more colors into the everyday urban landscape. Wealthy visitors to countless cafes and restaurants enjoy looking at demonstrators.

On their background, radical leftist and anarchist movement always stood out. Their attempts were especially successful in relatively cool months. During the events of 2008, when the riots on December 7 broke out due to neoliberal reforms carried out by the previous cabinet led by Costas Karamanlis 21 people, including 13 policemen have suffered.

Other political forces have also never hesitated to exploit strikes and marches through the streets of central Athens, Thessaloniki and other cities. Rather, the opposite - strikes, chanting, organized marches, rallies and protests involving the police at times became quite usual occupation not only for a marginalized part of the Greek society, but also quite ordinary civil servants and employees of private companies. Sometimes these "peaceful" actions were accompanied by smashing shop windows, banks and cars parked along the streets.

However, this violent manifestation of discontent on various agenda items of Greek politics rarely led to any serious political and socio-economic changes, especially in summer. This is evidenced by the history of Greek strikes observed since the spring of this year.

Remember the protests in June, when the government adopted a policy of strict budget savings to meet the EU requirements that required reduction of budget expenditures by 28 billion euros. The bill that became the main condition for the release of the EU extraordinary tranche of EUR 12 billion has become another "apple of discord" in Greek society that has been parasitic on European credits for three years.

The action plan also included tax increases and massive spending cuts in the public sector - to reduce the national debt to an acceptable level. All this, in turn, was to open the way for a new stabilization loan of more than 100 billion euros. However, the events at the Constitution Square in front of the "Wooley" (Greek Parliament) during the 48-hour strike did not lead to any significant amendments.

The 24-hour strike on June 9 also had political consequences. It was held as a protest against the program of accelerated sales of state property worth 50 billion euros that Greece is going to implement until 2015 under pressure from the creditors of the EU, the European Central Bank (ECB) and International Monetary Fund (IMF). It had no impact on the adoption of this program, and caused permanent series of demonstrations and strikes, which lasted the entire month of June.

As a result, against the backdrop of crowd control (including the use of tear gas) on June 29 the parliament passed the bill, which was the only way out of debt crisis without a default.

However, the Greek society prone to bouts of frustration did not calm down. Rather, the problem was brought inside. Even the decision to allocate 109 billion euro, adopted on 21 July at the EU summit, had no desired effect, as estimated by the world's leading rating agencies, and Greece itself.

These factors and the subsequent speculation about a referendum on the abolition of the euro have partly provoked the government to take new measures. In particular, regarding another reduction in pension payments. The pensions in excess of 1,200 euros will be cut by 20 percent. In addition, the number of civil servants who will be transferred to part-time wages will increase from 20 to 30 thousand by the end of 2011.

As a result, on September 22 a new series of strikes began, first in land transport, then air traffic controllers.

Despite this, the government of Giorgios Papandreou decided to go to the end and on October 3 introduced to the Parliament a draft budget for the next year in view of the aforesaid plans. While deputies are estimating the numbers on paper, the population responds in a typical Greek way with strikes and demonstrations, as well as the symbolic construction of gallows in the center of Athens to approve the unpopular measures of Deputies.

In part, this speaks of extraordinary political maturity of the Greek civil society protesting against laws before they are enforced, not after. This can also be explained by the decrease of average daily temperatures and the ability of the organizers to unite even the most passive strikers.

However, among the protesters at this time there is large enough percentage of students, which may also indicate a more serious social support. According to the director of the Institute of Economic Research Savvas Robolisa "the real unemployment rate is around 22-23 per cent against the official 15."

The neoliberal economic model is being criticized again. Similarly, the position is shared by the leadership of the European Trade Union Confederation (ETUC), which includes, in addition to the said trade union, the General Confederation of Labour of Greece (GSEE). In particular, this spring, president of PAC-Vedin Vania Lundby said that helping Ireland and Greece, officials from the European Commission ignored the social dialogue and directly intervened in the labor markets of these countries.

However, it is hardly likely that the current protests will lead to something greater than those in June of this year. Rather, it is still nothing more than letting off steam for the Greek society. The people involved in these actions, one way or another are well aware (with the exception of the Communists and the radical Left) that without the support of the EU's largest economies (especially Germany and France) it is impossible to rectify the situation.