Poland and Russia: Friends or foes? 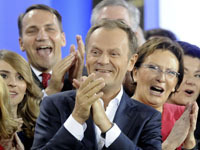 In Poland, the results of the elections to the Sejm are being finalized. For the first time in recent history, the same party has managed to win twice in a row. Prime Minister Donald Tusk is the first politician since the fall of socialism who will head the government for the second term.

According to the result of the ballots count, the liberal-conservative party "Civic Platform" led by Tusk received approximately 39 percent of the vote. This is approximately four percent lower than in the elections four years ago, but it is definitely enough to secure the first place. Now, Tusk is the first politician in the modern history of Poland who received a mandate to form a government twice in a row.

Tusk's current success is largely due to the fact that Poland's existence during the economic crisis was relatively painless. It is the only European country that has managed to avoid recession over the past few years. While the income level of the Poles is still much lower than that of the Germans and even the Czechs, this country has avoided shocks like those of Greece, Hungary or Latvia. It is impossible to deny the merit of Tusk here.

Fairly balanced foreign policy may have been beneficial for Tusk as well. He (with a couple of associates in his party, including President Bronislaw Komorowski) managed to improve the relations with Germany damaged during the rule of the Kaczynski brothers. Germany is Poland's main lender and employer to two million Poles. Tusk established a dialogue with Russia, albeit with no particular breakthroughs. His ability to build relationships with large neighbors is clearly appreciated by many.

The second place with over 30 percent of votes was taken by the right-wing conservative opposition party "Law and Justice", headed by Jaroslaw Kaczynski. During the campaign, he tried to play on the memories of his deceased brother who perished in the Tu-154 crash near Smolensk. The former prime minister has repeatedly said that the results of the investigation of the tragedy were not satisfactory, and that the government of Tusk "caved in to the Russian." Kaczynski is the idol of the nationalists and conservatives. While he is no different from Tusk in his opposition to gay marriage and abortion ("Civic Platform" is also negative in this regard) in terms of foreign policy they are very different. The rhetoric of the former head of the government is imbued with historical complexes and dislike of Russia and (to a lesser extent) Germany. Obviously, the theme of historical opposition is rather popular in Poland, although the majority does not have radical attitudes.

The third place with nearly 10 percent was taken by "Motion Palikot." Its leader is a former member of the "Civic Platform", the most controversial member of the Seim last year, Jan Palikot. He became famous with his loud statements about the late President Lech Kaczynski. He stated that before the crash on April 10, 2010 the late Polish leader was intoxicated. He said that Jaroslaw Kaczynski was a homosexual. Even his colleagues in "Civic Platform" distanced themselves from Palikot.

In any case, by creating his own party the politician has not lost. His slogans were exotic by local standards and called for legalization of gay marriage and abortion, legalization of marijuana, and dissolution of the Senate (upper house of parliament). Palikot said nothing on special phobias against Russia or Germany. As one can see, every tenth Pole liked this "modern" approach. However, the majority still remained rather conservative Catholics.

The fourth place with approximately 8.5 percent was taken by the partners of "Civic Platform" in terms of the ruling coalition from centrist Peasants' Party (in Polish - Stronnictwo Ludowe), headed by Deputy Prime Minister Waldemar Pawlak. Now the coalition of the two parties will continue to form the government, based on a parliamentary majority. This means that domestic and foreign policy of Poland in the near future is unlikely to change.

The last, fifth force represented in the Seim will be the Democratic Left Alliance, backed by a little over eight percent of voters. Never before in post-socialist years this party gained fewer than 10 percent of votes. However, the last year's crash near Smolensk killed almost the entire leadership of the party, and the Polish left have not have time to "raise" the new ones.

When the Poles made their choice, they, naturally, were more interested in the aspects related not to the external but, rather, internal politics. However, Poland that is currently presiding in the EU is trying to play an active role in the European arena. One of the main directions of its foreign policy is the east. Right before the elections the head of the government Donald Tusk started talking about Russian-Polish relations.

He said that the Smolensk disaster was a tragedy, and clarifying its reasons would not facilitate the task of a complete reset of the relations. He added that Poland and Russia deserve to have friendly relations. Both of these great nations can live together in friendship, and it should be based on truth, wise memory and the ability to move forward, said Polish Prime Minister  commenting on the future development of the Russian-Polish relations.

Indeed, the progress in the Russian direction can be credited to Tusk. In contrast to the Kaczynski brothers, he did assume the position of the "historically wronged," and did not demand endless apologies from Russia. He has repeatedly met with Vladimir Putin and Dmitry Medvedev. Last year, the two prime ministers attended a memorial ceremony at Katyn. The Russian-Polish dialogue on various topics - from the current socio-economic issues and problems of "Kaliningrad transit" to the historical disputes - has revitalized.

However, it would be wrong to consider Tusk a politician with a favorable attitude towards Russia. At the heart of Poland's EU presidency he made the program "Eastern Partnership" its cornerstone. Its members are Belarus, Ukraine, Moldova and the Caucasus countries, but not Russia. The Polish Prime Minister, just as shamelessly as the other Polish politicians, interfered in the internal affairs of Ukraine, demanding the release of Yulia Timoshenko. He was among the first to impose sanctions against the Belarusian authorities. It is unlikely that such activity on the outskirts of the former Polish-Lithuanian Commonwealth would find understanding in Russia.

Tusk also argued for placement of the elements of missile defense (BMD) of the USA in Poland. Partially through his efforts the American anti-aircraft missile complexes "Patriot" will be deployed on Polish soil (in close proximity to the border of the Kaliningrad region). Today Poles are pressing to reduce the price of the Russian gas. Tusk did not eliminate the historical claims either: Katyn claims remain valid, while at the same time the Poles tried to look away from the crimes of the Soviet-Polish war of 1920.

The victory of "Civic Platform" in Polish elections means that Poland will remain a fairly predictable partner for its neighbors. Tusk, in contrast to Jaroslaw Kaczynski, will not display radical posturing and Russophobia. However, he had never been and is unlikely to become a simple negotiating partner with Russia. Yet, the Poles did not elect him to at once surrender the interests of Poland, although those interests have a peculiar interpretation for many.