Who sets Lebanon against Syria? 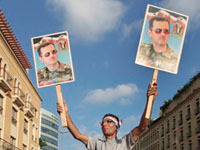 The West is concerned about the incursion of Syrian troops in Lebanon. Western media wrote that they attacked civilians in Beqaa, having killed at least one person, a citizen of Syria.

Syrian officials claim that it is the radical opposition that has been trying to use the Lebanese territory in the struggle against Bashar Assad's regime. News agencies have already released a number of news stories about the interception of caravans loaded with arms, including grenade-launchers and machine guns. The arms were supposed to be used against representatives of the Syrian army, policemen and state security officers.

What is really happening on the border between Syria and Lebanon? Pravda.Ru asked expert opinion from Mashal Haddaj and Ali Salim Assad.

Mashal Haddaj, a senior expert with the Russian Academy of Sciences:

"In this case, Syria is persecuting those who are connected with the riots in Syria. The development of the situation in this country was not supposed to echo in Lebanon. No matter how we may treat Assad's regime, we can not ignore the Syrian opposition just because of the fact that Syria's historical influence on Lebanon was immense.

"Lebanon also means a lot for Syria. The media have been accusing Lebanon's Hezbollah movement of its participation in the suppression of the "Syrian revolution." They have not been able to prove that yet, though.

"First and foremost, Hezbollah gunmen are guerrilla fighters who are trained to struggle against Israel. They conduct missile attacks, but they do not conduct punitive police operations. Secondly, they can not be efficient on the Syrian territory just because they do not know the country and its cities. Thirdly, Assad's position now is not that bad. He does not need to call Hezbollah for help. However, I believe that external forces are trying and will be trying to use the Lebanese territory and the situation inside the country to shatter Assad's regime and overthrow him.

"This raises serious concerns with Lebanon, because it is a multi-confessional country with a large share of Christians. Many dislike the current regime in Syria, and it does have many drawbacks. However, we all remember what consequences Iraqi Christians had to face as a result of the collapse of Saddam Hussein's regime. The same can be in store for Syria, and it will inevitably affect Lebanon.

"If Assad is toppled, Syria will plunge into the chaos of interconfessional war. The situation needs to be changed fundamentally, but the regime change must not reiterate the Iraqi history.

"It appears that certain external forces have been trying to isolate Lebanon after the assassination of Prime Minister Hariri in 2006. This coincides with the actions against Syria."

Ali Salim Assad, a representative of the administration of the National Unity Committee of Syria:

"The recent events must be analyzed through the prism of the internal struggle between the followers and the adversaries of the Syrian opposition. Assad's adversaries realize that Lebanon is Syria's weak point. The organization of this country, which is a home for many confessions, gives an opportunity to conduct the struggle against the influence of Damascus. Lebanon used to be a part of Syria. The French separated Lebanon from the country. However, it is not that easy to break historical ties. I am a Syrian national, for instance, and my grandmother comes from Lebanon.

"Lebanon greatly depends on Syria. It is surrounded by Syria from practically all sides. However, Syria's adversaries in the country are not in the majority. Let's take, for example, the Lebanese Druze, who support Assad. Someone is simply trying to use Lebanon to shatter the situation in Syria.

"Anti-Syrian forces in Lebanon are supported from within. It goes about two forces. The first one of them is Almustaqbal movement (the Future), chaired by al-Hariri, the son of the assassinated Lebanese president. He resides in Saudi Arabia and follows this country's orders.

"The activity of this organization was noticed in the territories, which were traditionally used for the delivery of contraband goods to Syria. It goes about the trafficking of arms too. Until recently, Lebanon was the country where one could buy the goods that were not available in many neighboring states.

"The leaders of Almustaqbal were trying to organize the camp of Syrian refugees not far from Syria's borders. They wanted to demonstrate the camp for the world to put pressure on President Assad.

"The second anti-Syrian movement is chaired by Samir Geagea. He is the leader of the ultraright movement, which appeared among the Lebanese Maronite Christians. He is very offended with Syria because he had spent 14 years in jail for exploding a church. He also represents the Maronites, who previously served at the puppet army of Southern Lebanon and fought on Israel's side."