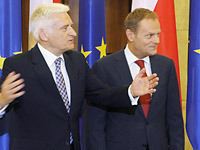 A two-day summit of Heads of State and Government of the member countries of the "Eastern Partnership" ended in Warsaw. It was attended by the leaders of the EU, presiding Poland, as well as Ukraine, Georgia, Armenia, Azerbaijan and Moldova. Representatives of Belarus were also invited to attend the event. Russia was not invited to the forum despite the fact that is the eastern neighbor of the EU.

The EU program "Eastern Partnership" was launched in 2009 on the initiative of Polish Foreign Minister Radoslaw Sikorski and Swedish Foreign Minister Carl Bildt. The countries of the Caucasus, Ukraine, Belarus and Moldova were invited to join. They were promised a large-scale economic aid, free trade zone with the European Union and easement of the visa regime. The first Forum of Heads of States of the "'partnership"' was held two and a half years ago in Prague. As the crisis has deepened, the interest in the program of the EU has weakened. However, Poland that took the chairmanship of the Organization on July 1st, has announced that a summit of the "Eastern Partnership" was its priority. As a result, Warsaw will be attended by head of the European Commission Jose Manuel Barroso, President of the EU Herman Van Rompuy, and a cohort of Commissioners and prominent representatives of the leading states of Europe.

From the very start of the program a question was raised: what about Russia? In Moscow, many pointed to the fact that all other eastern neighbors were invited into the program, but for Russia. Naturally, a suspicion arose that the EU wanted to create its sphere of influence in the CIS, pushing Russia out. Evidently, there have been enough attempts to create a "sanitary cordon" around Russia.

What is the purpose of the "Eastern Partnership"? Does this event indicate the anti-Russian attitude of the European Union? Alexander Rahr, German political scientist, director of programs of Russia and CIS countries of the German Council on Foreign Relations, shared his comments in an interview with Pravda.ru.

"How important is the "Eastern Partnership" in the EU foreign policy?"

"The Europeans are divided on this account. Some countries believe that the democratization of the countries of North Africa today is a more efficient project than the democratization of CIS countries. Today, within the EU there are many significant differences, including those of a probable Greek default, migration, and many more. The organization is in the midst of the most serious crisis in all the years of its existence. There is little money, and the world is talking about the inability of Europe to fight the crisis.

"The EU leaders must show solidarity in the matter of foreign policy. They have to show that Europe is capable of something. Poland played its role here as the presiding country. It needs to show that it can conduct foreign policy in the EU. There is no need to remind that the Poles have their interests in the CIS countries, especially Ukraine and Belarus."

"Russia is not involved in the "Eastern Partnership" and its representatives will not be attending Warsaw. To what extent will this agenda be aimed against Russia?"

"A number of countries (including Germany) wanted Russia to participate. Yet, if the countries of Eastern Europe would settle for that option, it would only happen under the terms of the West. Naturally, the Russian side could not be satisfied with this option. In addition, the commissioner for enlargement and neighborhood policy Stefan Fule made it clear that the EU intended to build new relations with its eastern neighbors. Europe is still able to export its democratic values, and it intends to be very active in this respect.

"Despite the presence of the EU sanctions against the Belarusian leadership, its representatives were still invited to Warsaw. What happened to the statements that Lukashenko is "Europe's last dictator?"

"The EU is extremely concerned about the current situation in Belarus. Its economy is on the verge of collapse. Many Europeans are seriously worried that under such circumstances the country would lose its sovereignty and unite with Russia. Alexander Lukashenko has closed the doors of his republic to the Europeans. If he continues to refuse to engage in a dialogue, Europe will be ready to talk directly with Belarusian civil society and support something similar to the "orange" revolution in Minsk."

"What does the EU want from Ukraine?"

"The Europeans gave Ukraine a difficult choice: either it is with the EU, or is it with Russia. It is clear that for the Ukrainian leadership it is a very hard choice, because the vast majority of the population is in favor of closer ties with Russia. However, the Europeans are adamant. In addition, Viktor Yanukovych will be certainly told about the need to halt the prosecution of Yulia Tymoshenko. In Europe she is considered one of their own, and it is a political process. However, Russia does not want her to be imprisoned either, so Yanukovych is in a very difficult position.  If there is no new association agreement between Ukraine and the EU by December, the union of Kiev with Europe could be in jeopardy. The dialogue on the abolition of visas for Ukrainians may be stalled. Ukrainian authorities need to do what they have to do by December, because then Poland's EU presidency ends. The new chairman will not have such interest in Ukraine. However, there are doubts that Ukraine will be invited to join the EU in the foreseeable future.

"What are the plans of the European Union in regard of the South Caucasus and Moldova?"

"The main interest of the EU in the Caucasus is related to the energy and transport routes. Today in Europe there is a mortal battle between lobbyists for the gas pipeline "Nabucco" and Russia's "South Stream". Both sides are extremely tough, and this circumstance cannot but affect the relations between Russia and the EU.   As for Moldova, it is the only CIS country the European Union is willing to grant membership to. It is small and Western-oriented. The only issue is the presence of Russian peacekeepers in Transnistria that Russia does not want to withdraw. This is another stumbling block in the dialogue of the EU and Russia that will certainly be touched upon during the summit of the "Eastern Partnership".