USA tries to feel comfortable between China and Taiwan 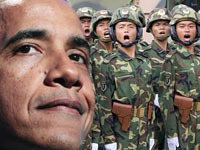 The United States, despite the promise not to supply weapons to Taiwan, intends to continue with the military-technical cooperation. This is a very sensitive issue for China. It is no accident that several experts speculated that this was the basis for China's "strange decision" on Libya, when it voted for the extremely unfavorable to the regime of Muammar Gaddafi resolution 1973 that NATO used to carry out air strikes on Libyan territory.

The relations with Tripoli were obviously not something unserious for Beijing. It is sufficient to point out that in the Chinese imports oil supplies from Libya amounted to three percent. Given that each year the need of the growing Chinese economy in the "black gold" continues to increase, China's abandonment of the prospective Libyan market was quite painful. The experts have concluded that there is no serious explanation for why the Chinese made this decision regarding Gaddafi except for the U.S. concessions on the Taiwan issue.

It is no wonder that the news of the continuation of military cooperation between Taipei and Washington have caused fury in Beijing. In recent years, China stepped up its military forces in the Taiwan area and simultaneously took steps to prevent the rearmament of the armed forces of Taiwan. This point was largely a tool of political influence on the Taiwanese leaders. Beijing made it clear that Taipei simply does not have enough forces for the defense in the event of a war, and that there is no alternative to the peaceful unification. However, the U.S. is not inclined to dramatize the situation. According to their assurances, Washington does not intend to violate previous agreements with Beijing regarding the refusal to supply Taipei with 66 F-16 C / D fighters, sought by the latter since 2007. The U.S. claimed that the deal mainly concerns the modernization of the existing Taiwan's armed military vehicles.

However, all this looks more like a ploy to deceive the Chinese. First, it suffices to say that the expected U.S. deal with Taiwan is estimated at over five billion dollars. That is, it fully compensates the losses caused by the failure of the arms deal signed in 2008 under George Bush. Second, a recent statement of the spokesperson of the U.S. State Department Victoria Nuland did not go unnoticed. She stressed that these sales will contribute significantly to the system of air defense of Taiwan and that they are a clear manifestation of the current administration's intent to support and improve the defense of Taiwan. She said that by selling military equipment to Taiwan, the U.S. promotes peace and stability in the Taiwan Strait.

Nevertheless, the U.S. stressed that its military cooperation with Taiwan is largely frozen, and as evidence pointed to the fact that they were not going to perform a contract with Taiwan in the defense sector worth 6.4 billion dollars signed late last year. The contract was for the supply of helicopters, Black Hawk, the latest minesweepers, advanced communications and, more importantly, improved SAM Patriot. Thus, Americans are hinting that there will be no improvement of the Taiwanese defense.

Yet, the Chinese are not fooled. They know perfectly well that the United States reassured Taiwan by promising to modernize its armed forces, including air defense. Of course, Washington's assurances that the upgrade of the existing 146 fighters F16 A / B compensates for the lack of supply of new equipment at least through the installation of an electronic radar AESA, did not go unnoticed by the Chinese.

It would be naive to believe that the U.S. that regarded Taiwan as its reference point in containing the "red menace" would simply capitulate and give it over to China. This would, first, greatly strengthen China, and, second, raise questions about the safety of the U.S.'s multi-billion investment in Taiwan's economy. In any case it would make the U.S. position in respect with China more vulnerable. Third, it would undermine the credibility of U.S. allies to Washington. Indeed, despite the fact that several provisions of its defense treaty with Taipei (including those of 1954 and 1979) are the matters of the past, in fact, Taiwan is still under American protection. Although the United States withdrew its earlier military bases from the island, there is always impressive American squadron in its vicinity. It has repeatedly prevented the attempts of the Chinese Navy to approach Taiwan.

So far Beijing's reaction is rather traditional: "We will reconsider our military cooperation with the U.S." However, this threat does not cause panic in Washington, particularly because China did not have serious limitations in the development of its armed forces. Despite all attempts of the Americans to impose "START in the Chinese version" on Beijing as well as limit the development of the Chinese Navy and Air Force, so far the U.S. cannot boast any particular successes. The Americans have nothing to lose, considering that the U.S. cooperation with China in the military sphere is more illusory and basically comes down to mutual courtesy visits of the delegations of the armed forces.

Earlier, China, angered by the American "machinations," have already breached a dialogue with Washington on defense issues. This was in no way disastrous for either party. So far China is not able to enforce a serious punishment for the U.S. that complies with the terms of its agreement only as long as it beneficial for it.

True, the issue of Taiwan arms deal should not be considered closed. It is not ruled out that the "modernization deal" with Taiwan will be the subject of the next trade with China on Syrian issue. Yet, would China go for it after such behavior of the U.S.?