UNO - You represent whom? 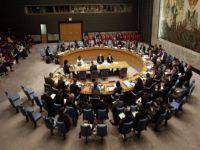 The United Nations Organization is neither United, nor it is an Organization, but rather, a club for trading interests and what community of Nations is it supposed to represent? Did anyone vote for it? Therefore speaking about the UNO and democracy in one and the same breath is ludicrous.

In fact, speaking about "democracy" at all is as absurd as it is hilarious since the only truly democratic system of governance is the Libyan Jamahiriya, thought up and implemented by Muammar al-Qathafi - a system based upon self-regulating communities called People's Councils who decide who their leaders should be, draw up plans for the community members and request funding and equipment for their needs, the role of the central Government being to distribute wealth and serve the interests of the people.

Enter the UNO, talking about "democracy". What "democracy"? Did anyone vote for the United Nations Organization? Then what right do a handful of members sitting in its Security Council have to implement policy which can have a direct affect on our lives? And how "democratic" are the member states supporting the policies it implements - policies which more and more rubber-stamp NATO's colonialist adventures?

Did NATO's David Cameron, Nicolas Sarkozy and Barack Obama listen when the Libyan Jamahiriya government offered to hold free and fair elections? No, they refused. And what will the future hold? Watch this space, as attempts are made to sideline the Jamahiriya and eliminate it from any future election process.

So what right has this United Nations Organization to start appointing support groups? Where was the UNO when this terrorist filth started torching buildings and beheading people in the street, ransacking Government and private property and sowing havoc? Where was the UNO to defend Muammar al-Qathafi - the man they were planning to award with a humanitarian prize - from these demonic hordes of racists?

It is crystal clear that this Libya Question is not about democracy or protecting civilians - NATO, after all, commits massacre after massacre and does not even bother to apologise any more. It just shrugs like the callous, cold-blooded, criminal clique of murderers it is.

Note: The notion that Muammar al-Qathafi should stop fighting is as ludicrous as it is to tell a home owner that he should hand his keys to an intruder who has broken in, raped his wife and killed his children. In that situation you fight back and inflict as much damage as you can... If you are a Man, of course!