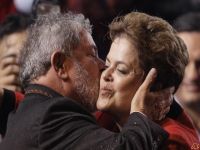 The 66th session of the UN General Assembly in New York today will be opened by Her Excellency Dilma Rousseff, President of Brazil. The high-level panel of women presenting speeches will launch the movement Making Gender Equality in Politics a Reality.

Let us ask ourselves a simple question: in two thousand years of male-dominated politics, how many wars have we had, have we really managed to form a world community of brothers and sisters, do we have an international law that is applied equally, do we have something called gender equality?

The answers to these questions are obvious and the solution to the problem is perfectly simple: involving more women in decision-making processes increases the likelihood for processes of debate, discussion and dialogue to occur, giving rise to more development and less deployment, the cause of so many tensions in our world today.

The following shocking statistics are provided by UN Women:

Women make up less than 10 percent of world leaders.

Globally, less than one in five members of parliament is a woman.

The 30 percent critical mass mark for women's representation in parliament has been reached or exceeded in only 28 countries, of which at least 23 have used quotas.

Local governments in all world regions are far from achieving gender balance.

Since 1992, fewer than 10 percent of peace negotiators have been women and fewer than 6 percent of reconstruction budgets specifically provide for the needs of women and girls.

Therefore the high-level meeting at the UN General Assembly this Monday will give the participants a chance to highlight the great deal that needs to be done in constructing a world in which women's rights and gender equality are a reality and not a chimera. Among the speakers are:

The Honourable Kamla Persad-Bissessar, Prime Minister of the Republic of Trinidad and Tobago

H.E. Hillary Rodham Clinton, Secretary of State of the United States of America

Michelle Bachelet, Under-Secretary-General and Executive Director, UN Entity for Gender Equality and the Empowerment of Women

By drawing the world's attention to the need for a central role of women's participation in politics and in government, it is hoped that the move towards definitively inclusing women in decision-making processes will be implemented on a worldwide scale and that the appalling statistics mentioned above will very soon start to change for the better.