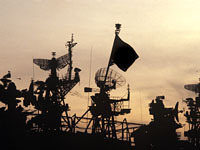 The U.S. and Romania signed an agreement on deployment of the elements of a U.S. missile defense system. Earlier it was reported that some elements of EUROPRO system will appear in Turkey. Everything indicates that the U.S. military machine and NATO are inexorably approaching the Russian borders. The US-Romanian agreement was signed on September 13 during a visit to Washington of Romanian President Traian Basescu. The document was signed by the foreign ministers of two countries - Hillary Clinton and Theodore Baconschi. Later Barack Obama met with the participants of the talks, although initially he was not planning to meet with Basescu.

According to the document, by 2015 elements of a U.S. ground-based missile defense system will appear at the former Romanian Air Force Base in Deveselu. They will include radar (SAR) complex Aegis, an operational control center, and mobile missile batteries with interceptor missiles SM-3 Standart-3. Approximately 200 U.S. military will reside at the base, but if necessary, this number will be increased to 500.

Nothing was said with regard to the fact who the missile base will be directed against. Earlier, U.S. officials and Basescu have repeatedly reiterated that the missile defense is not directed against Russia. However, recently there was another event that made the Russian side doubt that statement.

Some time ago the United States and Turkey announced that the Turkish territory would host an early warning radar system EUROPRO. Spokesman of the Turkish Foreign Ministry Selcuk Unal said that the decision to implement a project system of protection against missile attack of the U.S. and NATO was adopted at the Lisbon summit in 2010. Turkey has actively contributed to these original plans and made a significant contribution to the work. He added that there have been negotiations on the extent of Turkey's participation in this system, which have finally entered into the final stage.

According to the Turkish diplomat, the radar will be located in the southeastern part of the country. This will allow "scanning" the area with a radius of several thousand kilometers. Turkey insists that the new object is not directed against anyone, especially against Russia. This will only allow the country to contribute to the development of a new security system of NATO.

According to the American plans, Turkey will first host a mobile radar detection system AN/TPY-2. By 2015 there will be a new sea-and land-based modification of the SM-3. Subsequently, the system will be improved further so that it successfully reflects the threat against the United States and Europe from missiles of medium and long range.

The appearance of the two similar objects in the immediate proximity of Russian borders could not but worry the leadership of the country. In his statement the Russian Foreign Ministry stressed the need to sign a special agreement clearly stipulating that the elements of a U.S. missile defense are not directed against Russia. "The developments only increase the urgency of the need to obtain solid, legally binding assurances from the U.S. and NATO that missile defense facilities being deployed in Europe are not directed against Russia's strategic nuclear forces," commented MFA.

"The agreement with Romania to deploy a ground-based version of SM-3 missile system and Aegis at the former air base Deveselu, as well as the recent announcement of the impending deployment of the U.S. forward based anti-missile radar AN/TPY-2 in Turkey, suggests that the implementation of U.S. and Europe's missile plans is quick and smooth. This is happening amid a lack of progress in the NATO-Russian and Russian-American dialogue on the subject of missile defense," the Ministry commented.

Russia to build own missile defense system. From nothing - Read article

"Scheduled for deployment in Romania by 2015, regardless of the evolution of the real missile challenges, missile defense base is another link in the strategic infrastructure of the global missile defense system developed by the U.S. NATO-Russia Council needs to develop effective and targeted decisions about the purpose and architecture of the missile defense in the region", stressed the Russian Foreign Ministry. It may be added that the objects in Romania and Turkey are not the only ones of this kind. The United States and Poland agreed to deploy interceptor missiles Patriot at a Polish base in the town of Morong. The distance from this object to Kaliningrad is no more than 100 kilometers. As in the case of Romania, the Polish authorities also have repeatedly stated that Russian missile defense is not threatened. Initially it was planned to place these missiles near Warsaw, but they were eventually "pushed" to the Russian border. Finally, further north there is American radar in Norway, in the town of Varde, located near the Russian border.

Although officially its function is to monitor space debris, the Russian military and diplomats suspect that it was placed in violation of the ABM Treaty of 1972. Russia conducts regular talks on the operation of this facility with both the U.S. and Norway.

What does the emergence of a chain of objects of a U.S. missile defense system at the Russian borders mean? Military expert and senior vice president of the Academy of Geopolitical Issues Konstantin Sivkov spoke on this subject in an interview with Pravda.ru: "The U.S. and NATO continue the policy of encirclement of Russia with their bases in the framework of the project "Loop of Anaconda." Our country is still perceived by the Americans as the main strategic adversary, and they do not even make any secret of it. Their task is to neutralize our nuclear weapons and push us out of the major areas of the world's oceans. In this case - even from the Black Sea. Turkey, of course, has its own views on the missile defense system, but Romania is a pawn in the hands of the U.S., and its elite exist only because of the American support. The same can be said about Poland. As a result, there is a chain of U.S. missile defense sites along the Russian border, stretching from Turkey through Romania and Poland to Norway."