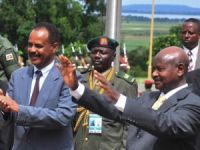 The recently released, and long awaited, Wikileaks Files on Ethiopia expose the lies used to justify UN inSecurity Council Sanctions in force against the little Horn of Africa country, Eritrea.

It has been over four years since the USA and its vassals at the UN began bellowing charges that Eritrea was supporting "Al Queda linked Al Shabab" fighters in Somalia. At the same time, the US Ambassador to Ethiopia was saying, stamped "Top Secret," that "The role Eritrea plays in Somalia, for instance is probably insignificant." {Wikileaks file "Ogaden; Counterinsurgency Operations Hitting a Wall, Part 2. sect. 7.}

For the UN Security Council to pass punitive sanctions against any country, especially such a small, underdeveloped country like Eritrea, one would think that some small modicum of truth would be presented in supporting evidence.

Now, thanks to Wikileaks, the so called "evidence" claiming to document a link between Eritrea and terrorism in Somalia all turns out to be bunkum, at least according to the secret testimony of the US Ambassador to Ethiopia.

From the voluminous charges made by the UN Eritrea Somalia Monitoring Group, to the US Assistant Secretary of State for Africa, and including just about every western funded "think tank" ranging from the International Crisis Group to Chatham House, it was all bunkum. Or so says the empire's senior man on the ground in the Horn of Africa, Ambassador to Ethiopia, Donald Yamamoto. And that almost a year after all the bellowing began..

Ethiopia has provided most of the muscle for what passes as US foreign policy in East Africa. As Columbia does for the USA in South America, as Israel is in the middle east, Nigeria in West Africa, Ethiopian Prime Minister Meles Zenawi and his army and paramilitary death squads do the dirty work in East Africa so the USA and its western allies can hold up their hands and proclaim them clean for all the world to see.

Behind the scenes, U.S. Ambassador Donald Yamamoto is the man in charge, the top gun, on the ground in Addis Ababa, capital of Ethiopia. Take it from an old "Africa Hand," what he says in secret, especially when he disagrees with what the politicians in Washington D.C. are saying, is what is most credible.

So here we are, almost 3 years into the Obama regime, and the USA is once again proclaiming Eritrean ties to terror in Somalia. Only now the sanctions being proposed are very serious and will harm the well being of the Eritrean people by damaging the economy and preventing Eritreans abroad from supporting their country financially.

As for all the bunkum "evidence," the arms that Eritrea is falsely accused of providing to the "Al Queda linked Al Shabab terrorists in Somalia"? It has been two years now since the UN General Assembly's Special Committee on Somalia issued a report that said that at least 80% of the arms available in Somalia came from Ethiopia.

Or were arms "donated" by the USA and other western countries to the so called "Somalia Transitional Government" and then sold on the black market, often times to the resistance. Recent reports continue to echo this fact on the ground, that the arms for sale in the arms bazaars throughout much of southern Somalia/Mogadishu come stamped Made in the USA, not Eritrea.

So, thanks to Wikileaks, we can try to once and for all, using words marked "Top Secret" by a senior mercenary of the American Empire, put the "Eritrea supports terrorism in Somalia" lie to rest. And maybe, though I wont hold my breath, the UN inSecurity Council won't pass more, far worse, sanctions against Eritrea.

Thomas C. Mountain is the only independent western journalist in the Horn of Africa, living and reporting from Eritrea since 2006.