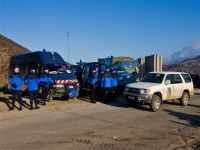 Pristina authorities have prepared a military operation "Storm Kosovo" if a solution is not found to incorporate the institutions in the north, sources from the top "justice" authorities in Pristina said. The source said that the Kosovo government has a constitutional obligation to apply all available resources to establish its authority throughout Kosovo.

This is why Kosovo will become unique in the world, in which the government plans to let in international forces, using force based on the model of Croatia, to carry out their "Storm Kosovo," says our source.

The existence of the plan "Storm Kosovo," with the alleged goal of trying to establish sovereignty and territorial integrity was confirmed by Bajram Rexhepi, Kosovo's interior minister, who also said in a statement that outside of any negotiations between Belgrade and Pristina, parallel structures will be abolished.

"It is a constitutional obligation of the government. We must establish government throughout the province and eliminate parallel structures that are supported by all our international friends. Therefore it is the obligation of the government without making any concessions to establish the rule of law in Kosovo's north" said Rexhepi, pointing out that the parallel structures will stop working throughout the province.

Rexhepi has indirectly confirmed that the closure plan for parallel structures and occupation of northern Kosovo involves a concerted action of security forces, which bring together the KPS, the intelligence and security agencies and associations of war veterans and their families, which were made available to Kosovo Prime Minister and war criminal, Hashim Thaci.

"The government's decision to establish the law in the north must be carried out," said Rexhepi, by announcing that the agreement between Belgrade and Pristina on the free movement of KPS and withdrawing all Serbian driver and vehicle registrations and Serbian identity documents.

Reaffirming the commitment of the government, Rexhepi said that, regardless of international pressure to force at least enforce the decision of completing the national territory, the head of the Kosovo Ministry of Internal Affairs said that the Pristina delegation in the negotiations following the 2nd of September will not under any circumstances accept any solution that may violate its sovereignty that lead to actions such as on the 25th of July.

Notice of the determination of Kosovo's government to the north, by hook or by crook, to establish an authority, was announced by Kosovo Deputy Prime Minister Hajredin Kuqi.

"Kosovo Police Service has the capacity to end parallel institutions and structures in the north. Our 'Storm' will not apply to citizens, but to criminals and leaders of criminal groups. The government has the full support of American and international friends to continue the action on 25th of July," said Kuqi.

Kuqi said that the action done against itself and KPS and the power structures are done by criminal gangs, who in the past 12 years have established a system of government, because they have the direct support of Belgrade.

We will protect civilians

Kuqi said that citizens have no reason to fear, because the Kosovo police will maintain control.

"We shall protect civilians. Kosovar customs officers and policemen will be deployed instead of the KFOR and the crossing Jarinje and Brnjak," he says. Kuqi said that the Kosovo police have free rein to assert control over the territory that, as he points out, now is controlled by Serbia.

"There are conflicts and disputes about the continuation of the action of 25 of July. I am sure that the head of EULEX, Xavier Bout de Marnhac's promise given to Kosovo Prime Minister and that he will do his part during the continuation of joint action," Kuqi said.

Translated from the Serbian version by: