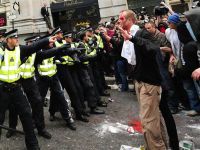 What happened a week and a half ago had the world open-mouthed in incredulity as waves of youths ran screaming through the streets of English cities kicking in doors, ransacking shops, breaking windows and going on a looting spree. Fires were lit, firemen were attacked so they could not put the flames out and police were taunted with a total lack of respect or fear.

The internet exploded with comments, some of them pertinent, others ridiculous. "Hang the bastards" was a typical statement from the more reactionary elements of society; "Revolution" was the keyword from those fantasising about a Leftist New Order installed in London. Parallels were drawn between the Libyan "uprising" and the English "uprising", calls were made for a no-fly zone to be implemented over England, which would entail the arming of the "rebels", the immediate labelling of the Cameron Government as illegitimate because it had "lost control" and clearly was "not fit to govern". One wonders what would really have happened if outside forces had done to England what the UK has done in Libya.

Notice I say "England" because this was essentially an English phenomenon, not a Scottish or Welsh one. Neither was it regional, it happened around the country - south, centre and north, and nor was it ethnically or racially connected. Many newspapers reported it was about "blacks".

Every case is a case in a specific context; we remember the case of the Brazilian Jean Charles de Menezes, gunned down in a horrific fashion in a Metro carriage back in 2005 because he...erm.... "looked Asian".

So basically, those youths being jailed today for four or five or six or seven months, for stealing a plasma TV screen or pinching a packet of bubble gum, are being ruled by those who sat in their crystal ball of excellence, doing the same thing, yet instead of looting shops, got the same goods by looting the British taxpayer. So MPs got their plasma screens legally by stealing from the British taxpayer and these "hoodlums" got 6 months for doing the same thing, yet ended up without the screen?´

In plain English, what the F**K sort of a country is this?

Cool. Was Cameron one of these? Hmmm....here is a Daily Mail piece, erm.. http://www.dailymail.co.uk/news/article-1189788/Cameron-took-maximum-taxpayer-funded-mortgage--paid-75k-loan-months-later.html

And what is this about David Cameron, the Prime Minister of the UK, being a member of the elitist Bullingdon Club, or as they said at Oxford University "The Buller"? In 1987, Cameron posed alongside the now Mayor of London, Boris Johnson... has anyone bothered to Google up their activities, eh what? The club members used to trash restaurants when drunk?

How amazing it is that someone like this gets to speak about Muammar al-Qathafi. Compare what one has done for Africa, and the other?

In conclusion, getting something for nothing is as common among England's "chavs" wearing hoods as it is among the Honourable Members sitting in the House of Commons; going out and getting drunk, smashing a few windows, kicking in a few doors and trashing a place is apparently as appealing to the "hoodies" as it is for the "toffs".

The difference is that when one belches after a meal, he's called a pig and the other is met by a chortle because the gentleman was visibly satisfied with his repast.

So, no big deal. Something for nothing, school holidays and generalised frustration at the state of the country. Let us hope it does not spread abroad, and let us all witness the very successful community-based approach adopted in England. However, throwing kids in prison and giving them a criminal record is not the answer; community-based rehabilitation schemes, which Cameron and Osborne closed, are.