An Island of Food in Africa’s Horn of Hunger

Most people in Africa spend most of their income on food. With food prices rising by over 50% drought is not the only cause of hunger in the Horn of Africa. While southern Ethiopia, home to half of Ethiopia's 80 million people, is suffering under its worst drought and famine in 60 years, residents in the northern capital of Addis Ababa are feeling the pinch of hunger due to near record high food prices. 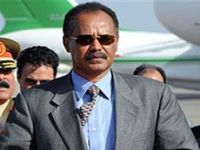 Yet next door to Ethiopia in Eritrea, where we have been living since 2006, there exists an island of food security where grain prices have fallen by half and hunger has become a thing of the past.

Why is it that according to Sukhwinder Singh Toor, the IMF capo in Addis Ababa in 2010, Ethiopia needs over $7 billion in aid a year yet millions starve, while neighboring Eritrea gets a tiny fraction of that and staple grain prices are falling dramatically?

While in early 2011 the UN Famine Early Warning System predicted millions would be starving in the southern half of Ethiopia the Meles Zenawi regime in power in Addis Ababa was exporting food, over 10,000 tons of rice in 2010 to Saudi Arabia alone.

Land in Ethiopia, good land, can be bought by foreigners from the government for a song, even less if leased for 99 years, putting another $100 million or more into the pockets of P.M. Meles Zenawi and his cronies. All the while basics like wheat, barley, sorghum and chick peas become so expensive malnutrition rates for children spike.

Ethiopia is the birth place of the Nile River, yet millions starve while in Eritrea, mostly semiarid, some 60% of the country's food is produced via micro dam fed irrigation systems, beginning to break the age old dependency on the rains to feed the people.

The drought maps for the Horn of Africa show an area running from Sudan to Ethiopia to Somalia and even Kenya yet in its midst, unnoticed by those reading their teleprompters on the news channels, there exists an island the size of Britain where affordable bread is there for all and slowly, but steadily, life gets better.

Johnny Carson, US Assistant Secretary of State for Africa may claim famine rages in Eritrea, but then he also says Ethiopia's economy continues to grow by double digits annually and never mentions a figure for the number of Ethiopian children that die every day of starvation.

Life expectancy in Ethiopia is falling, maybe plunging is a better word while even the World Bank uses words like "dramatic" to describe the improvements in life expectancy in Eritrea. Eritrea is one of the very few countries in the world that will meet the Millennium Development Goals (MDG), especially in the area of health for its children, malaria mortality prevention and reduction of AIDS.

Hillary Clinton may call Eritrea a dictatorship and Ethiopia a democracy, but if one measures human rights by access to clean drinking water, food, shelter and medical care rather than stuffed ballot boxes and fixed elections, than the descriptions would have to be reversed.

The Horn of Africa may be the Horn of Hunger for millions, but in the midst of all the drought, starvation and suffering there lives and grows an island of food security, little Eritrea and its five million people.

Unfortunately, none of this may be enough to prevent the UN inSecurity Council from passing even tougher sanctions against Eritrea in an attempt to damage the Eritrean economy and, inevitably, hurt the Eritrea people. This is all done, once again, in the name of fighting the War on Terror, or more accurately, the War on the Somali people.