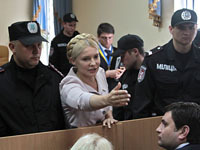 The trial of Yulia Tymoshenko, a former Prime Minister of Ukraine, attracted a lot of attention of foreign media. The majority of Western and Ukrainian journalists criticize Ukraine's sitting President Viktor Yanukovych claiming that he is simply trying to settle scores with Tymoshenko.

Britain's The Independent wrote that Tymoshenko's trial was a theatrical performance, which Yanukovych arranged to taker revenge on the former Ukrainian prime minister. In 2004, Tymoshenko announced Yanukovych's victory at the election a fraud and destroyed his triumph. Yanukovych, the newspaper wrote, wants to completely destroy Tymoshenko before parliamentary elections in 2012.

Both Western and Ukrainian journalists follow the "Free Yulia Tymoshenko" principle. According to them, the former prime minister of the former Soviet nation is as innocent as a child. However, The New York Times reminded everyone that Tymoshenko, the "gas princess", spent 1.5 months in jail in 2001 over financial fraud charges.

French journalists were especially expressive in their reports about the trial of Yulia Tymoshenko. The Marianne newspaper, for instance, described the trial as the "horrific phantom of Stalinism, a parody of justice comparable to the Moscow trials during the times of Vyshinsky, who was a master of political cleansing."

Also read: The curtain of the Yulia Tymoshenko project is going down

Experts of Britain's The Financial Times assumed that the administration of Viktor Yanukovych was pursuing its opponents and making steps away from democracy.

Western journalists also quote Sweden's Foreign Minister Carl Bildt, who said that the trail was "an embarrassing spectacle that was doing great damage to a great country."

What makes the West take Tymoshenko's side in spite of the fact that Western officials used to criticize Ukraine for its insufficient struggle against corruption? Marianne, a French publication, wrote that Yanukovych was capable of using worst police and court methods at the time when the European Union was doing its best to spread freedom and tolerance all over the world. According to French journalists, it goes about the arrest of a pro-Western politician and one of the leaders of the Orange Revolution of 2004.

Yulia Tymoshenko was arrested on August 5, which was an illegal decision to make, the French journalists wrote. They believe that the reasons for the arrest sound paradoxical and ridiculous: power abuse (under the gas deal with Russia in 2009 - ed.).

The New York Times quoted several human rights activists, who said that Tymoshenko's arrest was based on fabricated charges "that center on whether a document was stamped correctly." It goes about the document for which Tymoshenko used the stamp of the prime minister. The stamp can be used only if a certain decision is approved by the cabinet of ministers entirely. American journalists do not think that Tymoshenko's abuse of power could be categorized as serious offense. The Independent wrote in this connection that Tymoshenko's gas deal caused the damage of 118 million pounds to Ukraine.

Foreign media also paid attention to the reasons that led to Tymoshenko's arrest. The Financial Times wrote, for example, that Tymoshenko accused the judge of being Yanukovych's puppet. She also said that the judge was "not giving her a chance to fairly defend herself against the charges."

The FT journalists believe that many other Ukrainian politicians can be put on trial for the same and many other reasons. However, Kiev prefers to resort to "selective justice" to oust political adversaries. The New York Times wrote that the Yanukovych administration filed cases against eleven politicians of the Ukrainian opposition, including the former interior minister and the protege of the "Orange Princess" Yuri Lutsenko.

Mr. Lutsenko is a notorious figure. He took part in a number of brawls, but "he was involved in bringing a case against Boris Kolesnikov - a close ally of Ukraine's richest man, Rinat Akhmetov - as well as Evgenii Kushnaryov, the former governor of Kharkov, and other high-ranking members of Mr Yanukovych's circle," The Independent wrote.

Yanukovych's spokeswoman Anna German stated, though, that there were criminal cases filed against more than 400 officials, the majority of whom had nothing in common with the opposition front. Some of those officials were former allies of Mr. Yanukovych, she added.

Human rights activists do not believe such statements. They want to know their names, but Ukrainian officials only say that the lists with the names of those officials had not been delivered to human rights organizations, such as Freedom House, yet.

British reporters paid attention to Russia's concerns in connection with the case of Yulia Tymoshenko. Russian officials are certain that the above-mentioned gas deal was legitimate. "The deal was concluded in accordance with the laws of Russia and Ukraine," Russian officials said.

France's Marianne drew a comparison between Viktor Yanukovych and Russian Prime Minister Vladimir Putin. According to the French publication, the sitting Ukrainian president was a staunch ally of Putin, who seems to be nostalgic for such forms of despotism," the newspaper wrote.

Western publications draw parallels between the cases of Tymoshenko and Khodorkovsky. Some describe the events related to the Orange Yulia as the "Ukrainian Yukos." The Independent concluded in one of its recent articles that the gas deal "was welcomed at the time by the European Union."

British journalists believe that the case against Tymoshenko may trigger another energy crisis in Europe because Ukraine's Yanukovych is trying to revise the terms of the gas agreement with Russia. According to them, the price that Ukraine pays for the import is too high.

The Indpeendent also wrote that Tymoshenko will be a hard nut to crack for Yanukovych. If he fails to destroy her, he may have a much more dangerous political adversary, the newspaper said.

It appears that Yanukovych is ready to set forth new charges against the former Ukrainian prime minister. Ukraine's Segodnya newspaper particularly wrote that Tymoshenko could be charged with the murders of Vadim Hetman and Yevgeny Scherban. It is extremely important for Yanukovych to discredit Tymoshenko as a politician rather than to jail her, the newspaper said.

Nikolai Tomenko, a Ukrainian politician, told the Kommersant-Ukraine newspaper that the case of Yulia Tymoshenko may eventually lead to massive riots in Ukraine this autumn. However, his opinions do not find much support among Ukrainian journalists.

How is the West going to show influence on the Ukrainian President? Freedom House has already downgraded Ukraine's rating from a country deemed "free" to "partially free." On the ratings of Reporters Without Borders, Ukraine lost 42 positions as it slid down to the 131st of 178 places.

French journalists offer to boycott the Ukrainian part of the European Football Championship, which is going to take place next year. Western ambassadors in Kiev stated that the trial of Yulia Tymoshenko may ruin his plans about Ukraine's integration in Europe. It particularly goes about Kiev's agreements with Brussels about the free trade and association with the EU.