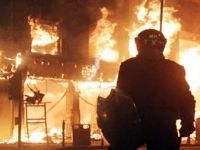 What happened in London last night - the torching of private property, wanton destruction, looting and generalised violence, was lamentable and unacceptable. Yet does it not provide a perfect answer from God, underlining the sheer hypocrisy with which western governments view and conduct policy, especially when we draw lines of comparison with Libya?

So, let us draw parallels and see how the UK authorities come out of this. On Thursday, the British police shot dead a man in the street. Tensions escalated during Friday and on Saturday night, some 300 youths congregated outside the local police station in the London area of Tottenham in a peaceful demonstration which got out of hand as members of the public from other areas of London and beyond ran amok in the streets, torching buildings and vehicles as they went on a looting spree.

Now let us imagine that for months - nay, years...I repeat, years, foreign powers had been arming and aiding not 300, but rather, 30,000 (thirty thousand) Islamist fanatics, who, equipped with heavy machine-guns, tanks, self-propelled artillery and anti-aircraft munitions, ran amok in London, Manchester, Liverpool and Bristol. If the police shot dead one man in Tottenham, if the police shot dead the Brazilian Jean Charles de Menezes, because he, er... "looked Asian" back in 2007, what would they do with 30,000 marauding thugs? Why, according to the British Government, evidently nothing, they would just stand back because "the people were deciding".

So why the bruhaha about Tottenham? But wait a minute, the police did react, against unarmed civilians! And if one civilian death is the result of a two-day incident involving 300 people, then we can extrapolate the figure of 100 civilian deaths at least, in the early hours of a general uprising, more or less exactly the real figures now coming out of Benghazi, and among these were Gaddafi supporters. Interesting.

Now let us imagine these "unarmed civilians" being attacked by the British police were actually heavily armed, had links to Al-Qaeda, were led by a convicted terrorist, were going around slashing people's throats in the streets, were torching government property and ransacking public offices. Let us imagine someone placed a stash of Viagra tablets on the floor of a police station and another stash of condoms inside the cells of Scotland Yard HQ, and then some American Congresswoman could claim there was proof of mass rape by the British authorities.

Then let someone call in the UN to bomb the crap out of Britain for five months because unarmed civilians were being attacked, to bomb the British armed forces fighting against this scourge so that the Islamist fanatics could gain ground, let us imagine the international media carried out an orchestrated campaign involving a blackout of the truth and the dissemination of lies, blaming the British authorities for atrocities it did not commit, blaming the RAF for sorties it did not fly...

Let us imagine the leaders of this UN clique of cowards, bombing British civilians from 30,000 feet for 5 (five) long months claimed that this was not about removing Cameron and Hague, then claimed that it would be better if they went, then claimed "They have to go". Then the British people could decide whether they were allowed to remain in Britain but of course, exile in Burkina Faso would be more appropriate (perhaps not, I insult the good Burkinese people)...

Let us imagine that the British Armed Forces put up a struggle and Cameron and Hague and The Queen appeared on State TV (whose antennae were bombed systematically), let us imagine that the equivalent of 20 million Britons took to the streets supporting their dearly beloved leaders (and only a handful of Islamist extremists were actually against them) and let us imagine their defiance was heralded by the British people who vowed to fight on the beaches and shores and cities and hills and villages and promised solemnly never to surrender...

Let us imagine that in face of this defiance, the UN coalition of cowards started lashing out in frustration, calling for the destruction of civilian structures to break the will of the British people, and bombed the main water supplies, bombed hospitals, bombed centres for handicapped children, bombed children's schools and in a wanton criminal act of first-degree murder, targeted the house of David Cameron, murdering his family in cold blood because they thought he was there. How would David Cameron feel?

In fact, given the behaviour of God-fearing Christians in Libya, I tend to side with Allah and the good Moslems trying to celebrate Ramadan as cowardly Christian crusaders try to kill them, destroy their civilian structures and impose foreign values on their society with a top-down approach. I only hope and pray that the clique of nations involved in this outrage reap what they have sown, tenfold.

By this, I mean that I hope that what they have wished and meted out to others comes back to them multiplied by ten. After all, they claim they are acting in goodwill. So...Allaaaaaaaaaaaaaaahu Akhbar!