Lithuania wants to punish Austria because of Russia 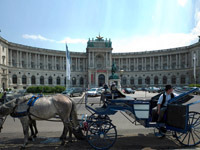 Lithuania has decided to withdraw its ambassador from an amicable EU country, Austria. The reason for the diplomatic demarche was the refusal of the Austrians to extradite a Russian citizen, ex-commander of "Alfa" unit Michael Golovatov. Lithuanians want to prosecute him under the "hunt for Soviet witches."

This happened because Lithuania sought to pull Austria in the historical fight with the Soviet Union and Russia. Ex-commander of "Alpha" was wanted because of the tragic events near the Vilnius television station on the night of January 13, 1991. According to the Lithuanian authorities and the judiciary, he was involved in the "war crimes" against Lithuania 23 soldiers are wanted in this case, 21 of them live in Russia and two reside in Belarus. They all participated in the storming of the television center.

The absurdity of the charges is obvious. At that time, Lithuania's independence was not recognized by the international community. The Special Forces were given orders by the Soviet leadership, and fulfilled them in the Soviet Union. The death of 14 Lithuanian and one SWAT member was a tragedy, not a war crime. There was no war or aggression. Some in Lithuania are trying to link the story with genocide, but it does not stand up to any scrutiny.

Vilnius District Court issued an arrest warrant for Golovatov back in 1999. Last year, the Seim adopted amendments under which the crimes incriminated to Golovatov and his fellow commandos have no statute of limitations and shall be punishable with imprisonment for life. Over the years the Lithuanian authorities have sent 94 requests for the extradition of wanted persons to Russia, Belarus and Germany, but the requests were always rejected. However, Lithuania has issued an international arrest warrant for Golovatov.

On July 14 the news came from Austria that rejoiced the Lithuanian authorities: Golovatov was arrested in Vienna. Strictly speaking, the Austrians could not do otherwise. Lithuania, like Austria, is a part of the European Union, and they are obliged to consider such requests on a priority basis. The Austrians had ten days to think. However, they did not procrastinate and sorted things out in just a day.

On the night of July 15, Golovatov was released and immediately flew from Vienna to Moscow. Representatives of the Austrian police have indicated that the temporary arrest was not renewed due to the fact that the Lithuanian party has not provided the necessary documents. Vilnius was silent for a couple of days, but on Monday a real hysteria rose that was absolutely unacceptable in the framework of the proper relations of the EU partners.

President Grybauskaitė gathered an early morning meeting with the Attorney General, representatives of the Ministry of Foreign Affairs, Ministry of Interior and the Ministry of Justice. The meeting has resulted in a scandalous decision taken to withdraw the Lithuanian ambassador to Austria from the country. The presidential adviser Daiwa Ulbinayte, commenting on the decision, said that according to the president, Austria's haste in the release of the suspect in the case of January 13 may not be politically justified and compromises the EU cooperation in justice.

The deputies of the Seim of Lithuania do not intend to leave it without consequences. The head of the parliamentary committee on foreign affairs Emanuelis Zingeris announced his intention to appeal to the NATO allies and European Union, asking them to assess the violation by Austria of the principle of solidarity declared in Europe.

A member of the Seim and the Brotherhood of the defenders of the independence of Lithuania Auksute Ramanauskayte-Skokauskene was not shy in the choice of words. "Undemocratic Russia put pressure on Austria, demanding the release of the former KGB colonel Mikhail Golovatov. Members of the brotherhood of Lithuania's independence advocates feel humiliated and insulted," she said. She proceeded to accuse the KGB of delaying an investigation in Lithuania.

What is Austria to blame for? Perhaps, for following the letter of the international law? The accusations against the members of the Special Forces are more than doubtful. Most likely the Austrians are familiar with the revelations of the former head of the Department of National Defense of Lithuania Audrius Butkevicius, who said that on his orders on the night of January 13, 1991 people with guns shooting at people were placed on the roofs of houses.

Is there a political component to the story? Most definitely. Russia has repeatedly stressed the absurdity of the accusations against Golovatov put forward by the Lithuanian side. Is it worth for the Austrians to fight with Russia about that? Hardly. Austrians, who do not have their own nuclear power plants, are very dependent on the Russian gas, and last year they decided to join the gas pipeline project "South Stream". Indulging Lithuanian hysterics they would simply call into question their energy security.

It is worth mentioning that the Austrians did not even bother to respond to the Russophobic stream of consciousness from the Baltics. This is understandable as it is hard to imagine that the Lithuanians would be able to make the EU "flog" Austria. The European institutions are also interested in cooperating with Russia, and threatening this cooperation by the historical search of ghosts is too much. This is especially true considering that earlier Germany gave a negative response to the request of the Lithuanians.

As for the appeal to NATO, this is simply a clinical case. In all probability, in the midst of the Russophobic hysteria Lithuanian politicians simply forgot that Austria is not a part of the alliance. What is the best way to punish the unruly Austrians through NATO? Bomb Vienna or Salzburg? Prevent them in the future to join the ranks of the military block? Not to supply weapons to Austria? This is something out of the realm of fantasy.

Finally, let us look at a comparison of the performance between the two countries. In terms of the population size Austria is only two times larger (less than four million people in Lithuania against the eight-plus million in Austria). Furthermore, according to the data of the pre-crisis year of 2008, the GDP per capita in Austria amounted to $39,887, while in Lithuania it was $14, 273. The difference is almost three-fold. The total GDP of Austria is 330.5 billion dollars, while in Lithuania this number is 48.1 billion.

Hardly anyone in the European Union knows a name of at least one Lithuanian company. At the same time, the names "Raiffeisen", "Swarovski", "Strabag" and many others are well-known far beyond Austria's borders. All these companies have a long and successful work history, including in the Lithuanian market. What will they do in Lithuania? Shut down the offices of these companies and banks? But this is a direct violation of the EU rules on the freedom of movement of the capital. In this case Austria might initiate such a suit against the Lithuanians that they will never repay it.

Lithuania has had a chance to compete with Austria, and the competition was not in favor of the Baltic state. Even when Lithuania was a candidate for the EU membership, the Austrians asked them to close the Ignalina nuclear power plant. This was done in 2009. Incidentally, the former communist Czech Republic and Slovenia have defended their nuclear power plants. However, in those countries the authorities do not have a Russophobic hysteria as much as Lithuania has it, and still remember their genuine interests. As a result, Lithuania has turned from an exporter to an importer of electricity.

What does Austria have? Modern industry, powerful banks, highly developed agriculture, high-class ski resorts, imperial palaces and music festivals of worldwide importance. The list of people this country gave to science and culture is very long. Lithuania is clearly no match for the Austrians in terms of the economy or culture. It has nearly no industry, and agriculture in Europe is uncompetitive. In terms of culture it does not have any significant achievements either.

It is not surprising that Austria is among those selected states that determine the policies of the European Union. The country's leadership is well aware of their national interests. They are able to put pressure on their neighbors, but do not throw temper tantrums like "Czech Republic in 1918 has ruined our empire from within" or "because of e Russian interference we lost Austria-Hungary."

Lithuania has no choice but to substitute its economic insolvency with the historical fights with Russia and be upset that Austria does not intend to forget its national interests in favor of Russophobic hysteria of the Balts. The search for the ghosts became the Lithuanian national idea in the past, and sometimes is reminiscent of political schizophrenia that a solid rich country in Central Europe does not want to share.