Future of Greece hanging in the balance 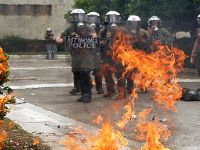 Greece's future and the stability of the euro have been hanging in the balance. Angry voters are beginning a strike and demonstrations beginning Tuesday.

Austerity measures in Greece have been a disaster. The economy has worsened, there's been no progress on the debt, and interest rates are higher than ever.

The government of Greek Prime Minister George Papandreou won a vote of confidence last week, but he has only 155 of the 300 seats in parliament.

A bill is due to be voted on by MPs on Wednesday. The European Union and the International Monetary Fund are threatening to withhold a loan of 12 billion euros of emergency funding if the bill is voted down.

Parliament will be looking at measures, including wage cuts, tax increases, increasing the VAT, a new tax on soft drinks, lowering the tax free threshold for property owners and the privatization of 50 billion euros, or about $71 billion, in state assets that include water and sewer facilities and the power company.

This is seen by the people as a "selling out" of their country.

Greece needs the loan to pay its expenses through the summer. Without this, Greece will default. Leaders claim these measures are the only way to economic recovery.

Meanwhile, the possibility of a military coup surfaced. Several Greek troops have threatened a military coup against the government because the Greek people, according to the Greek officers' union ANEAD "will not be sold to foreign powers."

The following statement was released by demonstrators:

After 34 days of every day demonstrations and occupation of the Syntagma square, the final battle is arriving. In a few hours starts the 48 hours General Strike and the encirclement of the Parliament. The "med-term austerity plan will not be voted, our lives will not be sold off!

48 hours on the streets - the whole country will be at Syntagma Square!

We are now only a few hours from the 48-hour nationwide mobilization of 28 and 29 June. Everything indicates that the 48-hour General Strike could form part of a nationwide uprising that would ultimately bury the notorious Medium Term Austerity Programme.

This struggle is not only critical for our future, but also a beacon of hope for all the peoples of the world who want to take their lives into their own hands. The demonstration at Syntagma Square marks the beginning of a new direction.

On June 28 at 9:00 am we are gathering at Syntagma Square to protest and wait for the strike protesters to join us. At 6:00 pm a big popular concert will begin, which will last until late at night.

On June 29 we will coordinate all our forces in order to completely surround the Parliament. The People's Assemblies from the northern suburbs will meet at 8:00 am at the Evangelismos metro station. Amongst others, the People's Assemblies of Agia Paraskevi, Halandri, Holargos, Papagos, Zografos, Glyka Nera, Pallini, Galatsi, Maroussi, Heraklion, N. Ionia, Patisia, N. Philadelphia, Gizi, Piraeus and Ambelokipi-Erythros Stavros-Polygono will be there.

Accommodation for the people coming from across the country has been organized.

For all the people who, for whatever reason, cannot be on foot at blockades, it is very important that you help the encirclement of the Parliament by participating in a peaceful traffic demonstration starting at 8am: several hundred cars running continuously at speeds of 10-20 kph on Kifissias Street, Mesogion Street and Michalakopoulou Street returning from alternative routes whenever the police divert them will create a huge difficulty for the Members of the Parliament to access the House.

Once again, just as we have done ever since May 25, we insist that the character of our struggle be massive and decisive. We call upon everyone to respect and guard our decision.

We warn the government and the commissioners of the troika to not even consider the possibility that repression can break our resistance.

To Mr. Pangalos' dilemma "Mid-term Programme or tanks", we answer: "the apple doesn't fall far from the tree. Be proud of your grandfather!"

We are not leaving unless they and their dilemmas leave first!

The squares belong to us. We have the right on our side. We assert the obvious:

Faith in our powers. It is us or them!

We are condemned to victory! The Mid-term Programme SHALL NOT PASS!