Will Tunisia become another Iran? 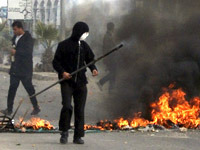 Where is Tunisia moving without its former leader? This question is quite appropriate in connection with the convictions against former President Zine el-Abidine Ben Ali and his wife Leila Trabelsi. They were sentenced in absentia in Tunisia to 35 years in prison for the abuse of power, embezzlement of budget funds, murder, illicit trade in archaeological finds, money laundering and violation of legislation provisions dealing with public tenders. Given the age of the "defendants," we can be talking about life sentences. However, it seems that no one will be imprisoned.

Ben Ali who fled to Saudi Arabia called the process initiated against him a "masquerade", and the search of his apartment that provided "evidence" in the form of two kilograms of drugs and 19 million euros, a "hoax." The purpose of it all is loss of credibility, a symbolic demonstration of breaking the links with the past and an attempt to achieve the legitimacy of the new authorities.

The deposed president also calls the information concerning his amassed wealth a lie spread by the media. However, it is doubtful that he lived in a luxurious palace in Jeddah on the funds of the Saudi king. Of course, the media may have overstated the capital acquired by him over 23 years in power. For example, the Swiss authorities confirmed freezing his accounts containing tens of millions of euros.

However, this is not the most important thing. It is far more interesting where Tunisia is currently moving after breaking up with the "authoritarian past." The protests of the unsettled youth against corruption were named among the main reasons of the crushed Ben Ali clan. Will the people assuming power make a difference? Especially considering that many in the West underestimate the danger from the Islamists previously harshly suppressed by Ben Ali who have now returned to the country.

Interestingly, some European media outlets have statements like "Egypt and Tunisia are much closer to European civilization than Belarus and Ukraine." Le Mond suggests that Tunisia should be accepted to the EU, which would secure its revolutionary and democratic changes.

Yevgeny Satanovsky, President of the Middle East Institute, shared his thoughts in an interview with Pravda.ru:

"The revolution that led to the fall of Ben Ali is not a panacea for Tunisia. It is no accident that Tunisians themselves are already joking about his escape: "Ali Baba has escaped but his 40 robbers are still here." Judge for yourself: the protesters that were shot under Ben Ali are still being shot. Moreover, in some ways the situation is even worse. It is a standard post-revolutionary situation similar to that of 1921 in Russia, when the country was thinking with nostalgia about 1913.

Now the power in Tunisia is in the hands of many representatives of the old team, who were quick to dissociate themselves from Bin Ali. Representatives of other political forces also penetrate in this group. In this sense, Tunisia is not much different from the countries of the region that have already been through the turmoil. Representatives of the new force, using the plight of the economy and the inability of the old team to change things for the better, are gradually taking power, and after a while ordinary citizens will really start to think of the power they lost with nostalgia.

These "newcomers" are the Islamists. The most prominent of these is Hanuš, who is considered the most western and most Europeanized Islamist. But how is he different from the "Muslim Brotherhood" or Algerian fundamentalists? In fact, only in words. Both focus on the Islamization of the society, severe restriction and narrowing of the rights of the religious minorities, women, etc. The difference is only in the methods. Unlike others, Hanuš is not calling for cutting anyone, why would he? He only talks about creating the conditions for the Islamization to take place. The result is the same for everyone.

However, given the level of Europeanization of Tunisia, it is clear that the attempts to make Iran out of it will not work. Most likely, the situation will develop in accordance with a softer Turkish scenario. It is clear that the percentage of Islamists in power will rise. In fact, it is programmed by the bleak situation in the economy, which automatically gives rise to the progression of the radicals. New elections in the country once again will prove it. After all, the country's economic problems cannot be solved overnight relying on the country's own resources.

However, if the EU decides to expand by accepting North African countries, it will not be surprising. The excitement from the onset of the "Arab spring" in the West is beginning to fade. The influx into Europe of tens of thousands of refugees from North Africa is a revelation that the influx of migrants to Europe was hindered by the dictatorial regimes. What is happening now is just the beginning. In the near future, millions of seekers of a better life from just across the Mediterranean will come every year. What to do with them? You cannot send them all back. There is no agreement on this issue between the Europeans other than statements of fact about the collapse of the policy of multiculturalism.

Anyway, every year Arabic-speaking voters are taking a greater share from the politicians of Europe. This will result in respective decisions, including the adoption of Tunisia in the EU. But this only means that we will soon simply lose Europe."