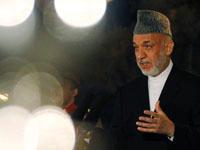 The problem of the credibility gap between the Afghan authorities and NATO has become actual again in light of never-ending battles and the growing number of casualties in Afghanistan. The gradual withdrawal of US troops from the country is expected to begin this summer.

The ongoing growth of losses among NATO military men makes other members of the block think again about the return of their soldiers from Afghanistan. The general public in Germany, for instance, believes that their country must suspend its participation in the peacemaking operation in the war-torn country.

"Germany's defense minister Thomas de Maiziere needs to finally acknowledge the truth: victory is this war is impossible. One should concentrate on a a different goal to restrict the number of casualties and to arrange the withdrawal of troops. To achieve that, one should conduct negotiations about political regulation of the Afghan problem," Frankfurter Rundschau newspaper wrote. Canada announced plans to withdraw its troops from the troubled country in January 2011.

The authorities of Afghanistan do not insist on urgent withdrawal of NATO troops from their country. The presence of NATO military men is still considered a necessary condition for the struggle against terrorism. However, the recent killing of 14 civilians in an air raid in the south of Afghanistan could not leave Afghan President Karzai indifferent.

"If they continue their attacks on our houses, then their presence will change from a force that is fighting against terrorism to a force that is fighting against the people of Afghanistan. And in that case, history shows what Afghans do with trespassers and with occupiers," Karzai stated during a news conference at the presidential palace in Kabul.

"This time, NATO had to apologize for civilians' deaths. However, to win the support of the Afghanis, Western peacemakers need to apologize not only when the evidence against them is incontestable," German newspaper Süddeutsche Zeitung write.

The NATO administration is aware of the fact that Afghan President Hamid Karzai is too weak. Nevertheless, the prospect for the West to lose the support of the Afghan population entirely is much more dangerous than Talib warlords. If NATO decides to continue the bombing of Afghan rebels despite casualties among civilians, it may result in much bigger protests.

US Secretary of State Hillary Clinton stated it was a tragic fact that some civilian casualties were unavoidable in Afghanistan. According to Clinton, every incident was investigated thoroughly. General Petraeus, the commander of US and NATO forces in Afghanistan, also said that he would do everything possible to reduce the number of civilian casualties in the country.

It is worthy of note that NATO's mistakes have become frightfully frequent in Afghanistan recently. On March 10, 2011 NATO mistakenly killed one of President Hamid Karzai's cousins. NATO forces stormed 65-year-old Mohammad Karzai's home in the southern city of Kandahar late Wednesday, killing him and detaining his son, according to the President's brother, Ahmad Wali Karzai.

It appears that the West is not interested in such accidents. Tragic mistakes testify to the lack of professionalism among the US-led coalition forces. These mistakes occur against the background of chaos and anarchy in Afghanistan, and no army in the world can put an end to it.

Hamid Karzai is facing a difficult dilemma. If he turns down NATO's support, he may find himself in the same line with Taliban fighters. Karzai's friendship with the West does not bring him much profit, though. The people of Afghanistan have to pay a very high price for NATO's support. This may eventually lead to lamentable consequences for the ruling regime.