Conference condemns the militarization of Latin America by U.S. 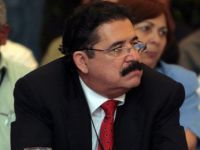 Intellectuals, representatives of social movements and political forces gathered in Buenos Aires, Argentina, last Wednesday (1st) to discuss the process of re-militarization of Latin America by the United States. The Continental Conference on Imperialist Militarization was attended by the writer, journalist and member of the Advisory Council of Mopassol, Estella Calloni, who warned about the U.S. military bases installed in Latin America.

It is now necessary to consider the military bases, the actions of paramilitaries in Colombia, the different forms of state terrorism employed, the presence of U.S. troops in Haiti and the situation of Mexico, facing a war between drug trafficking cartels, which has left over 37,000 dead since December 2006.

Estella Calloni positively assessed the realization of the Council of Defence meeting of UNASUL (Union of South American Nations) and the creation of the Center for Strategic Studies of Defense in Buenos Aires. "The CEED was created from the need to consolidate a South American identity on the subject of defense. It aims to build a vision of its own, oriented from the specific needs and common interests of the countries in the region. "

Another participant at the meeting, an anthropologist at the University of Washington, Adrienne Pine, denounced the U.S. role in the coup against the President of Honduras, Manuel Zelaya. Almost two years ago - on June 28, 2009 - Zelaya was deposed from office and sent into exile. In late May, the former Honduran president returned home and was greeted by demonstrations, banners and posters of the Honduran Resistance movement.

To discuss issues such as national defense, sovereignty and Latin American integration, the Paraguayan general, member of the Center for National and International Studies and the former Defense Minister of Paraguay, Luis Bareiro Spaini, pointed out the geostrategic importance of UNASUL.

"The international scenario is dynamic and is composed of the simultaneous familiarity and the transformation of a bipolar to a multipolar state of affairs, able to include and discuss, unlike the old proposals that had been in favor of a bilateral mechanism, exclusive and clearly hegemonic," he emphasized.

Also during his speech, Spaini quoted a passage from contemporary thinker, Noam Chomsky, to support the values ​​of the sovereignty of countries and peoples. "Sovereignty is no value in itself. It can only be regarded as a value when it is linked to freedom and rights. When you talk about these values, we must bear in mind human beings, not political constructions, such as corporations, states and capital."

For Spaini, the integration must be understood as the sum of national identities, not as the dissolution of the particular characteristics in a single uniform entity. The general also stressed that the issue of the sovereignty of the nation-state in the framework of regional integration in different continents is a constantly updating process.

The president of Mopassol (Argentine entity that integrates the World Peace Council), Rina Bertaccini, presented during a speech a few alternatives to imperialist militarization and disclosed the information that in recent years the number of U.S. military bases and members of NATO in Latin American countries have doubled.

Rina recalled the experience of Mopassol and called the struggle of Vietnamese people during the Vietnam War "unforgettable." For the current situation, Rina said that the need is to minimize and to interrupt U.S. influence in Latin America's regional integration in all spheres - economic, political and cultural. Rina cites the creation of the South American Defense Council, created by UNASUL, and the Community of Latin American and Caribbean initiatives as relevant to the ongoing struggle.

Besides these, other more specific measures were noted by the president. "The determination of the Ecuadorian government to get rid of the U.S. base at Manta, and the Argentine government's decision to renationalise the Military Aircraft Factory in the city of Cordoba are part of this transformation process.

To analyze the world situation and the role of NATO, the United States and the European Union in Middle East conflicts, the director of Cebrapaz (Brazilian Center for Solidarity and Struggle for Peace), José Reinaldo Carvalho, issued a statement noting that the War against Libya is the "first of the Obama administration, but the third to be conducted, since he inherited the wars in Afghanistan and Iraq from the Bush administration."

"As in all the recent wars of U.S. imperialism and its allies against other nations, a war started under false pretenses and has the complicity of a huge and powerful machine of lies - the media, which prepares the land with arguments concerning alleged violations of human rights, the perpetration of crimes against the civilian population and disobedience to international treaties," he emphasized.

According to Jose Reinaldo, the NATO bombings in Libya are part of an overall global strategy of the imperialist powers to turn to their advantage the events that have shaken the Arab world and all the Middle East, from the victorious demonstrations in Tunisia and Egypt.

The director recalls and explains how Cebrapaz has been fighting for peace and harmony between peoples. "When NATO turned 60, the World Peace Council, along with other peace organizations in Europe, participated in two major acts. One of them, in Belgrade, in the course of the 10th anniversary of NATO bombing against Yugoslavia, the Kosovo War. The second act took place in Strasbourg to protest against a NATO summit."

José Reinaldo points out that since its introduction in 1949, NATO has had an aggressive character. He recalls that the alliance was the main instrument of U.S. imperialism with its European allies in the fight against the socialist countries and in their actions to impose the neo-colonial system in the world in the period after the Second World War.

During his speech, José Reinaldo pointed out the historical aspects that helped the geographic expansion of the Alliance and the negative dimension that it has taken over the years. "NATO is responsible and guilty for crimes against peace and humanity. It violated international law, tore up the UN Charter, and has destroyed the sovereignty and territorial integrity of Serbia and the former Yugoslavia under false pretenses. They are crimes that cannot go unpunished."

To conclude, the director of Cebrapaz ended the speech by highlighting the common goal between NATO and the United States. "This war machine, which serves imperialism, remains with the same goal over the years, plundering the resources of nations and peoples, to control markets and exercise political domination," he reflected.