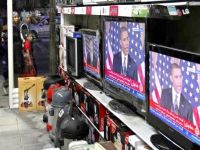 In a speech in the early afternoon Thursday (19th), the U.S. president, Barack Obama, announced the general policy of reprogramming that American diplomacy must employ in the Middle East. The adjustment takes place after the administration evaluated the previous policy as a failure, after the uprisings by the Arab peoples against oppressive regimes allied with the United States in the region took place.

In a speech at the State Department in Washington, Obama announced his new political rhetoric that the future of the United States "is linked to the Middle East and North Africa by economics, history, security and 'fate'."

The announcement this Thursday marks a new phase of imperialist intervention in the Arab and Muslim world. Obama declared the death of Osama bin Laden, the leader of al-Qaida, and the "terrorist network" created by the CIA to fight the Soviet occupation of Afghanistan in the 1980s, amid popular uprisings of pro-democracy in various countries.

Since the protests began, Obama is the target of protests and criticism for the inconsistent position taken in relation to historical allies such as Bahrain and Yemen. The regimes of these countries committed crimes against humanity and have not been subjected to any threats or sanctions, as have been made against Libya - which endures an almost limitless aggression by the armed wing of imperialism, NATO - and Syria whose president was recently placed on the list of persons sanctioned by the U.S. government.

In his speech the U.S. president announced measures to help countries in the region. Obama said the United States has asked the World Bank and the IMF to implement a plan for the "stabilization" and "modernization" of the economies in Tunisia and Egypt.

Regarding the Palestinian question, Obama first announced that the borders between Israel and a future Palestinian state must be based on those of 1967. By contrast, he says he wants to see a disarmed Palestinian state, whose security depends, according his words, on the current occupier and aggressor.

"The borders of Israel and Palestine should be based on those of 1967, with mutual and agreed exchanges, so that secure and recognized boundaries are established between two states," Obama said in a long speech about the Middle East.

"The full and phased withdrawal of Israeli military forces should be coordinated with the assumption of Palestinian security responsibility in a sovereign non-militarized state," he added. "The duration of this transition period must be agreed and the effectiveness of security arrangements must be demonstrated," he concluded.

The statement reflects a tactical retreat in U.S. rhetoric and a victory for the resistance movement of solidarity with the Palestinians. The U.S. argued today that the Palestinian demand for the occupied territories should be "reconciled" with the intention of Israel to have "a Jewish state with secure borders."

At the same time, Obama fires small torpedoes, he announces that "the Palestinian effort to delegitimize Israel will end in failure" and disqualifies the current struggle of Palestinian leaders by saying that "symbolic acts in the UN" will not create an "independent state." Obama refers to the Palestinian Authority's intention to obtain recognition of a Palestinian state in the UN General Assembly next September.

Going forward, Obama said repeatedly that the "security" of Israel is a U.S. priority, even so, the speech will surely be criticized by Israel, whose prime minister, Binyamin Netanyahu, will shortly visit the White House.

The rhetoric of Israel is that the borders of a Palestinian state should be defined through negotiations, but in practice the Israeli state has increased settlements in occupied territories and ignores UN resolutions and sanctions against the construction of new Jewish settlements in the West Bank and against the construction of the so-called Wall of Shame, which separates Israelis from Palestinians and steals more territories of the latter.

In addition to torpedoing the latest actions of the Palestinian government, Obama has decreed that there will be no dialogue with the Islamic Resistance Movement (Hamas). The realization at beginning of the month of an agreement between 13 Palestinian political and military movements in Cairo deeply angered the governments of Israel and the United States, who see Palestinian unity as a lock to imperialist pretensions and claims in the region.

Against the enemies, the law

Without changing the discourse of past occasions, Obama has condemned what he called "violence of the Syrian regime" against the supposed opposition protesters and made threats to the country's president, Bashar al-Assad, saying he should "lead change" or "get out of the way." If Assad does not start a true dialogue with the opposition he, "will continue to be challenged from within and from outside pressure," he threatened.

The Department of the Treasury on Wednesday announced sanctions against Al-Assad and six other Syrian officials. Those sanctions also were followed by requests for similar actions in countries like Germany and Switzerland, and has increased speculation about new international pressure for the overthrow of the Syrian president.

Russia and China condemned the sanctions, saying they will not contribute to the stability of the region. Syria said that the measures "will not affect the Syrian stance in regard to the actions of security forces" in the repression of what the country's government calls, "actions incited by armed terrorist groups."

Syria also complains that sanctions are another link in the chain of pressures from different U.S. administrations against the country and adds that, ultimately, sanctions serve Israeli interests.

Syria also accused the Obama administration of applying the politics of two weights and measures, to make propaganda against the supposed killing of alleged victims of protests in the country, while being responsible for the deaths of countless civilians in Afghanistan, Pakistan, Iraq and Libya. Moreover, the Syrians also hold the Obama administration responsible for the criminal actions of the Israeli occupation forces against Palestinians, who only this week have killed more than 20 demonstrators on the day called "Day of the Nakba."