Israel's Netanyahu and his passion for traveling 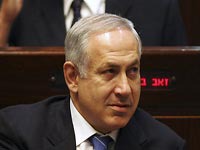 Israeli media have recently published scandalous information about the Prime Minister's four foreign trips funded by big business of Israel and the U.S. However, the journalistic investigation is not the first attempt to sink the Israeli Prime Minister Benjamin Netanyahu.

A TV reporter Raviv Drucker was the initiator of the scandalous proceedings regarding foreign travel of Netanyahu. In his show he provided public evidence that the Prime Minister and his wife took long and expensive trips abroad funded by "private sponsors." For example, in 2004-2005, the couple Netanyahu made six foreign trips, which, according to the report's author, were mainly funded by the center of socio-economic development and the Friends Likud in the U.S.

Netanyahu is mainly blamed for using his official position for personal gain. Incidentally, the sums mentioned in connection with the scandal are quite reasonable. The average Israeli who makes a couple thousand bucks a month can hardly be impressed that Netanyahu and his wife have spent $11,000 on a vacation in the US. Nevertheless, for political opponents of the Prime Minister it is a rare occasion when they can criticize the "infallible Bibi."

It is not clear whether the law enforcement agencies in the near future will be undertaking an investigation into mismanagement of funds. According to the official information, head of the Government Accountability Office Michael Lindenstrauss will check the accuracy of the information released by the media and only if it is confirmed the police would consider the case.

"The investigation of the state controller will include two aspects: the legality of the donations received by Netanyahu for his campaign, and the legality of funding of foreign trips of the Prime Minister and his wife," a news agency reported.

The Israeli press also released information suggesting that the overseas trips of several other senior officials maybe looked into. However, the fact that Lindenstrauss obtained the rights to collect evidence and question witnesses (in accordance with the request submitted to the Knesset) are alarming signals for Netanyahu. "These powers assume, among other things, that the witnesses to be questioned by the state office have no right to remain silent. The law provides for monetary penalties for failure to answer or the replies considered evasive by the Commission," Zman.com reports.

"Bibi-tours case" is still far from the end of the political career of Netanyahu who has experienced numerous ups and downs in 30 years of his tenure in politics. In 1996 his first cadence as the Prime Minister started. Once in power, he announced his commitment to a peaceful settlement with the Palestinians, but refused to recognize the Palestinian state.

Tightening of the policy against Palestinian extremists was consistent with the expectations of the Israeli society that has survived the bloody terrorist attacks in the mid-1990s. The fact that the war on terror has become a major trend in the politics of Binyamin Netanyahu is not accidental. In 1976, a sniper's bullet killed his brother who participated in the operation to free hostages in the Ugandan airport of Entebbe.

In the economic sphere, a series of measures aimed at controlling inflation and encouraging private enterprise were carried out in this period. Nevertheless, some of the steps of the Israeli Prime Minister, such as closing a number of core enterprises considered unprofitable displeased the left. Netanyahu lost early elections held in Knesset due to differences in 1999. Only ten years later he was able to once again become the Prime Minister.

During his political career, Bibi has survived a few nasty scandals initiated by the media. The first political scandal erupted in 1997 when the Prime Minister was accused of helping his political ally involved in fraud and bribery. "Inconvenient questions" to Netanyahu and his wife appeared later as well.

In 1998, Channel 10 released data that Netanyahu reportedly spent 131,000 shekels during his trip to London. In response to such "revelations" the chairman of the Likud party demanded that Channel 10 pays compensation in the amount of two million shekels for libel. "A tendentious campaign is being conducted against Netanyahu and the Likud, driven by fear of the Israeli elites before the election of Netanyahu as head of the government," said at the time the chairman of the worldwide movement Likud Danny Danon.

Another public scandal involving the name of the Israeli Prime Minister took place in January of 2010. Then  maid Lilian Perez filed a lawsuit against his wife Sarah Netanyahu, accusing her of despotism. As told by Lillian, the wife of the Prime Minister was paying her less than the minimum and forced to work during the Shabbat. Later, the woman also told the police about the anonymous threats that have emerged after the filing of the claim to the court. According to the investigation, a call was made by a recidivist Oren Abraham from an Israeli prison in Ramle.

The charges against Netanyahu's wife were withdrawn. Israeli lawyers could then restore the reputation of the Israeli Prime Minister. The court was provided with the evidence of financial rewards and expensive gifts received by the housekeeper from the Netanyahu couple.

Summing up, it should be noted that the scandal that erupted in 1998 was somewhat similar to a current story of the financing of foreign travel. Yet, this time things are far more serious. The fact that currently the Comptroller General is involved in the investigation indicates that the stakes are as high as ever.

In any case, in the Israeli media, as well as in the society as a whole, there is no consensus on the so-called "case of Bibi-tours." The supporters of Benjamin Netanyahu tend to see this scandal as irrelevant because the law does not prohibit receiving expensive gifts from friends and partners. The opponents, by contrast, strongly insist that such actions violate the moral standards and are insulting to the citizens of Israel.