Berlusconi is filmed making a joke about sex with secretary 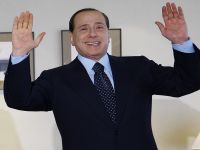 When asked who was the best coach for the soccer team, AC Milan, the billionaire mogul and club president told reporters earlier this month: "Look, I'm getting old. This morning when I was chasing the secretary to have sex with her on the table, she told me: "But the President already had sex for two hours! " I replied: "The memory fails me," grinned Berlusconi.

Journalists around prime minister Berlusconi laugh and then Berlusconi soon says: "If you write that, it will be ..."

In the video, we hear the replies of more people : "No, no. That, no. Stay calm, president."

The Italian press hardly echoed Berlusconi's joke. The material was aired in one of the most viewed and commented on by the Italians - and hated by Silvio Berlusconi - Annozero of Rai 2, Italian public television channel. According to the presenter, a DVD with Berlusconi's joke had reached the producers of the program.

Berlusconi is famous for his controversial comments about women and sex, the left parties, religion, foreigners and homosexuals. The Italian prime minister is accused of having paid to have sex with the Moroccan dancer Karima El-Mahroug, known as Ruby, when she was 17.

He also faces charges of abuse of power and tax evasion. (ed. These are the high and mighty leaders of the west who, instead of giving their people what Gaddafi has, spend their time in self gratification.)