Has Fukushima become another Chernobyl? 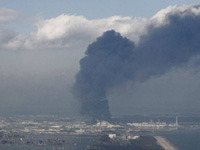 On April 26 the world remembered the Chernobyl disaster. The 25th anniversary of the Chernobyl accident came amid another nuclear tragedy, this time in Japan. What is the situation in Fukushima now, after over a month after the accident? Can we draw parallels with the Chernobyl disaster? Is there a future for nuclear energy after the accident? Vladimir Khrustalev, an expert on nuclear technology with Maritime University of Nevelskiy answered these and other questions in an interview with Pravda.ru.

"Now, after more than a month after the events in Fukushima, they are compared to Chernobyl increasingly more frequently. Is this justified in your opinion?"

"Yes and no. It is too early to talk about all the details, but Fukushima-1 will go down the list of major catastrophes in the history of nuclear power along with Sellafield, Three Mile Island, and Chernobyl. Fortunately, for a long time the emissions were carried away into the Pacific Ocean, but certainly a part of the territories were out of the usual economic activity for a long time and will become the zones of exclusion."

"After the accident at Fukushima the number of opponents of nuclear energy has grown significantly. Some European leaders are discussing eliminating it altogether. Is there future for it under the circumstances?"

"Now the nuclear industry is indeed at risk. The accident at the Fukushima plant is used for speculation that "sooner or later, Chernobyl will repeat itself." However, it is completely forgotten that these incidents occurred at the plants that used old technology of 1960s-1970s, and, to put it mildly, it is difficult to imagine a similar situation at modern nuclear power plants (there are already a number of mechanisms that dampen the reactor in case of emergency, even if the power plant systems shut down). Take Japan for example: there are many nuclear power plants, but the accident happened at the old Fukushima. The operator of the plant was repeatedly caught at various violations and appropriate steps to improve the security measures were not taken, despite numerous recommendations of experts, including IAEA. By contrast, modern stations, as evidence has shown, have successfully survived the disaster. "Miserly pay twice "- this rule applies to all, not just nuclear energy, and not only energy."

"In connection with the accident the supporters of the nuclear ban refer to the fact that it may be replaced by thermal and alternative energy."

"First, with regard to thermal energy. First of all, it includes coal, oil and gas industries. Coal-fired power is the cause of death of one million people per year worldwide! In the U.S. alone every year 24 thousand people die from direct and indirect causes related primarily to the environmental pollution by coal plants, and the total damage caused by these deaths is estimated at 167 billion dollars per year. It just so happens that these deaths are distributed along various common graphs of medical statistics, so no one draws special attention to them. Ash dumps, emissions of greenhouse gases, acid rain, etc. are all the consequences of the thermal energy."

"And what about alternative energy?"

"As for alternative energy, at least for now, it cannot meet all the needs of humanity (although for some countries it is quite capable of it). This applies to all types of it, such as geothermal, wave, tidal, solar, wind and others. Firstly, energy transmission, distribution and consumption should be changed, and this is the task of larger scale than creating new generating capacity and replacing old one.

In addition, nuclear power does not have a direct correlation of the final price of a kilowatt-hour and the cost of fuel, unlike any of the thermal power sources.

Secondly, usually when people talk about renewable energy, they mention photovoltaic panels and wind turbines. Yet, solar panels do not work at night, and their peak power falls onto days with clear sky and lasts only for a few hours. With regard to wind turbines, their average power in many cases is approximately 20% of the peak one, and all the reviews indicate the peak power, i.e., the maximum potential possible. However, they are an excellent choice for many tasks, such as household energy, as well as assistance to power system as a whole.

Yet, each case must be considered separately. Calculations have to be made, as nuclear, alternative and traditional thermal energies are a ​​highly mythologized area, both in terms of ecology and economy. Geothermal, tidal, and wave forms of generation are being actively developed, but so far the attained capacity of individual objects is not sufficient for the tasks of the energy complex at large. Although, of course, the proportion thereof will grow significantly, and in many cases it is a suitable foundation for solving problems, but not all of them, and not always and not everywhere."

"Nevertheless, the critics of nuclear power argue for the abandonment of nuclear energy right now, and switching to thermal energy."

"First of all, they appeal to how it is "safe" and "environmentally friendly". Again, many of them are completely unwilling to take into account the data that shows that the use of thermal energy results in 24,000 deaths per year in the United States alone, and in the world - over a million. I mean cancer, lung disease, etc., resulting from the emissions of thermal power plants. Particularly difficult situation in this respect is observed in East Asia, for example, China."

"How harmful is nuclear energy to the environment?"

"As paradoxical as it may sound, nuclear energy is much cleaner than most of thermal energy types. Even taking into account accidents and summarizing the overall damage. Right now, same as at Chernobyl, the situation resembles the one in which people, when buying an item, are not using it according to the instructions attached to it. Yet, this does not prevent them from complaining to the manufacturer. Both in Chernobyl and at Fukushima-1, a key problem was the human factor. There is a problem of nuclear waste, and it is a considerable issue. However, it is not so much a technological as social and political issue. Scientists in several countries have developed technological systems for the rapid conversion of high-level waste into the low-activity waste under the influence of powerful radiation. Yet, if the politicians instruct to bury the waste in the repository, then we have to do it."

"Some scholars believe that discarding the nuclear power is premature, at least because its potential has not been fully discovered."

"Exactly. Take, for example, the inefficient use of nuclear fuel. Only a few percent of the potential fissile material really burns down in reactors, and the rest (uranium-235 and uranium-238 and plutonium-239 accumulated in the reactions) are in most cases the waste. It is possible in principle to increase the efficiency of utilization of nuclear fuel and expand the base for nuclear power, but it will require large and long-term policy decisions, including changes in many political and technical regulations and standards. The nuclear power, as everything else, should be treated from the standpoint of rationality, technological, social and environmental. We should not come down to various forms of populism, which include, of course, naive technological optimism.

"Prior to the accident at Fukushima the idea of ​​using fusion energy has emerged. In particular, there was an idea of creating a nuclear fusion reactor that would provide power almost to the entire Europe. How can it be implemented in the current situation?"

"I do not rule out that it is really the future of energy. Obviously, it is not as close as we would like. The transition to the fusion power would mean not just a great leap, it would be a much more fundamental event than the transition from thermal power plants to the nuclear ones as a type of industrial energy.

Of course, the question about long-term environmental safety of fusion energy as a source of industrial energy arises. The answer can only be obtained in the experimental study of the actual process of operation of the plants."