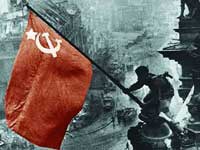 Ukraine is arguing over the way to celebrate the Victory Day. The Verkhovna Rada (the parliament) voted to officially lift the red banner of Victory next to the state flag. Deputies of western regions are working hard to deny the Soviet symbols and downplay the significance of May 9.

On April 21, 2011 the Verkhovna Rada amended the "Law on the perpetuation of the Great Patriotic War of 1941-1945." According to the new law, a red flag may go up next to the state one at all celebrations. It can also be done on the days of other anniversaries associated with the battles of the Great Patriotic War, for example, on the occasion of the liberation of a city from the invaders.

The bill was introduced by the representatives of three factions - Alexander Kuzmuk with the Party of Regions, Peter Tsybenko and Eugene Tsarkov with the Communists, and Sergey Grinevetsky from the Bloc of Lytvyn. Nationalists from the former Yushchenko bloc "Our Ukraine - People's Self-Defense" tried to disrupt the discussion, but the Communists defended the bill by blocking the podium. As a result, they had enough votes for its adoption.

It would seem that there is nothing to discuss as the law was adopted for mandatory execution throughout the country. However, in the western areas where the propaganda to glorify the Ukrainian nationalists who fought on the side of the Nazis has been ongoing for over 20 years, a different point of view is dominant. Local city and regional council's one after the other make decisions absolutely contrary to those of the law adopted by the Verkhovna Rada. The essence of these decisions is simple: get rid of Soviet symbols.

Here is the chronicle of the last few days. On April 15, the city council of Ivano-Frankivsk called for a ban on hanging flags with Soviet symbols in the city. "Under this hammer and sickle flag millions of Ukrainians were killed, tortured and starved, and the decision of the city council will be the due respect for all the victims of the totalitarian regime," said Mayor Victor Anushkevichyus.

According to Ivano-Frankivsk lawmakers, veterans of the front deserve respect, but not the members of the KGB or NKVD. In addition, they urged the deputies of the Verkhovna Rada and President Viktor Yanukovych to declare May 9 the Day of Remembrance of Victims of the War and not organize parades. Apparently, this call was not heard in the center. Yanukovych is not going to veto the law.

On April 19, at the initiative of the radical nationalists of the union of "Liberty," a similar decision was made in Lutsk. Banners of victory will not be hung on the buildings of all government agencies. All celebrations must be conducted without Soviet symbols. Having made the decision, the members of the "national-conscious forces" left the room with a sense of the "accomplishment".

Finally, on April 21 the city council of the informal capital of Western Ukraine - Lviv - made a similar decision. It is from now on forbidden to use the symbolism of the USSR and the CPSU here. This is done in connection with the "possibility of spreading of the symbols of the non-existent totalitarian state in Lviv." It is worth mentioning that the suggestion of one of the MPs to ban Nazi symbols was rejected.

Concurrently, the supporters of the former speaker of the Verkhovna Rada Arseniy Yatsenyuk of the party "Front for Change" addressed the Lviv district administrative court to ban the Victory March, which visiting anti-fascist activists from the Crimea and Odessa were going to organize in Lviv. Yet, the judges felt that the decision on this issue is beyond the scope of their competence. Then a representative of the union "Freedom" Vasyl Moldovan took the floor.

According to him, the nationalists will block the buses with anti-fascist activists. "We do not plan to resort to any unlawful actions, but we will do everything to prevent them from marching in our Bandera city," said Moldovan. He added that in Lviv the Victory Day is the day of mourning. The corresponding decision was made by the local deputies a year ago.

The recent decisions of the Verkhovna Rada and the city councils of western Ukrainian cities have once again highlighted the problem of different historical memory existing in different parts of the country. Will it be possible to reconcile two parts of Ukraine? What should be done when a number of local councils openly sabotage the will of the government? Vladimir Kornilov, the director of the Ukrainian branch of the Institute of CIS and Baltic countries, shared his thoughts with Pravda.ru.

"These controversial parliamentary decisions are the result of the fact that the historical memory in different regions of Ukraine is different. They have different memorials, different holidays, and different heroes. There is an irreconcilable ideological struggle between the two parts of Ukraine, and today it has entered a new phase.

The cult of Bandera started in the western provinces in 1989. The brainwashing there continues. According to them, the Victory Day is not a holiday, and all Soviet symbols there are ostracized. The Attempts of Lviv residents to celebrate May 9 properly turn into clashes with the aggressive nationalists every time. The police regularly and openly sides with the latter.

As for the recent decisions of the city council in Ivano-Frankivsk, Lutsk and Lviv, they should be the subject of a serious investigation. They clearly exceeded their authority. It is not up to them to determine which holidays to be celebrated and which should not be. This is the authority of the Verkhovna Rada. You can imagine what would happen in Lviv if some of the city councils in the South-East cancelled the Independence Day. The deputies of these city cdounils would be dragged to prosecutors and courts by the nationalists.

The ideological split in Ukraine is hardly avoidable. Forty years ago it seemed that it was over, that Banderov followers in the western areas have been destroyed or fled abroad. But it was not the case. After the "orange revolution" it was Galicia that decided to conduct an ideological "rush to the East," but was rebuffed. This struggle between Eastern and Western Ukraine sometimes involves arms, but more often it is ideological.

To date, in the East, South, and even in the center of Ukraine the Victory Day is a sacred holiday. It still means more than the Independence Day or Constitution Day. In spite of the indoctrination of the "orange" years, it was not possible to erase it from the consciousness. In most western regions the situation is different. The only way is to transform Ukraine into a federation where each part of the federation will have its heroes and its monuments. It is unlikely that imposing heroes on the 'other' Ukraine will be successful.