Argentina condemns past president to life in prison

Reynaldo Bignone, 83, is accused of kidnapping, torture, murder, and being involved in disappearances during his dictatorship 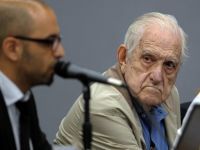 On Thursday, the Argentine court sentenced to life imprisonment the last president and dictator, Reynaldo Bignone, 83, and the former police officer, Luis Patti, 59. Both are accused of kidnapping, torture, murder and causing the disappearance of people during the military regime (1976-1983).

Bignone and Patti will serve their sentences in a common prison. The verdict was broadcast live on major television stations in the country. "For crimes against humanity they are condemned to life imprisonment," read Judge Maria Lucia Cassaín.

Families of victims of the dictatorship and members of various human rights groups welcomed the decision. Outside the court, located in San Martín, hundreds of people raised flags of Argentina and signs with pictures of missing persons in the so-called "years of lead" in the country.

"We could not expect less than life imprisonment for all of them," said the Secretary of Human Rights of the Argentine government, Eduardo Luis Duhalde.

The president of the organization Grandmothers of Plaza de Mayo, Estela de Carlotto, said: "This day was long awaited." She added: "Many countries in the region are looking at what is happening in Argentina in the area of ​​human rights. It's a breakthrough."

In the opinion of Duhalde and Carlotto, the decision was right to send them to a common prison, without any privileges, because "they are dangerous people."

Carlotto's daughter was killed during the dictatorship. She located the girl's body, but still looks for her grandson, who today would be 32 years old, and could have been adopted as a baby with another identity. The organization is dedicated to pursuing these babies, who would now be over 30 years old.

Besides Bignone and Patti, three other former military and police officers were convicted - two of them also to life in prison in the common jail.

This was the second time Bignone was convicted of crimes against humanity. In a trial last year, he was sentenced to 25 years in prison, also in the common prison. At the time, he accused members of human rights groups of "falsehood" and said he "did nothing wrong."

Patti heard the decision in an ambulance outside the court. He suffered a stroke in prison where he was awaiting the verdict. He was charged with crimes committed before and during the dictatorship.

In the democratic period, he became mayor of the city of Escobar and worked for the government of former president Carlos Menem. In 2005, Patti became an elected federal deputy, but his mandate was refused and he did not assume the seat in the National Congress.