The West has its own good and bad terrorists 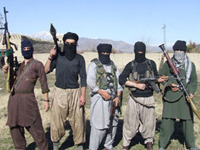 Iranian Foreign Ministry demanded the European Union should stop supporting the terrorists who conduct subversive activities against the Islamic Republic. Ramin Mehmanparast, an official spokesman for Iran's Foreign Ministry, stated that the EU must stop giving shelter to terrorist organizations such as Mujahedin-e Khalq Organization (or MEK).

The statement from the ministry was made after the Iranian army attacked a camp of Mujaheddins in Iraq on April 8. Up to 34 people were killed in the battle.

Western and Iraqi media outlets represented that as a manifestation of Iran's aggression. Iran reproaches them for supporting the terrorists that had killed over 12,000 people. In the West, they believe that it is Iran that supervises the activities of Shiite terrorist groups such as Hezbollah.

Rajab Safarov, the director of the Center for the Research of Modern Iran, shared his views with Pravda.Ru about the relations between the West and the Islamic Republic.

"Mujahedin-e Khalq Iran (the People's Opposition of Iran) is the most reactionary, active and bellicose groups. The group periodically conducts terrorist acts against the Islamic Republic. As a matter of fact, it is the USA and the EU that use the group for their political purposes to destabilize Iran. The West hopes that the group will become a tool to tame Iran. As for Mujaheddins, they have been cooperating with the West actively for over 20 years already. They used to have their one and only strongman - Saddam Hussein, Iran's sworn enemy. He could use them in his own interests whenever he wanted to.

"However, despite the financial and political support of the West, the group enjoys very insignificant authority among the Iranians themselves. It relies on marginals, criminals, Iranian emigrants and Arab mercenaries. During the eight-year war between Iran and Iraq from 1980 to 1988, the group was openly waging war against its own people. The Iranians will never forget this; most of the people treat the Mujaheddins as traitors.

"After the toppling of Saddam Hussein, they became fully subordinated to the West and puppet Arab regimes. The EU and the USA fund the activities of Mujaheddins, and they are not trying to hide it.

"It's curious that the West continues to accuse Iran of interfering in Iraqi affairs. The West does its best to make Teheran react adequately to the threats from Iraq. The Iranian army is forced to conduct regular raids of the Iraqi territory to destroy those terrorists for the sake of the national security. The West only expresses concerns at this point.

"The sitting Iraqi authorities promise Iran to liquidate the camps of Mujahedin, but they are not doing anything for it. Instead, they claim that there are too many of them in Iraq, that they have families and that they would avenge in case the authorities put pressure on them. That is a lie, of course. Mujaheddins still enjoy the support of the West.

"The EU legalized those terrorists in 2009 as it removed them from the list of terrorist organizations. Still, European leaders claim that Iran supports terrorism. This is a blatant example of double standards. If Teheran is doing something, the West sees that as terrorism. If Mujaheddins are attacking Iran - that is not terrorism. This is a typical example of how Western democracy works," the specialist told Pravda.Ru

As for Mujaheddins, they are not just a group of gunmen. In addition to the National Liberation Army of Iran, there are also political structures responsible for the ties with the West. The political wing of the organization is headquartered in Paris. The shadow parliament is also located in the French capital. The parliament consists of 570 members representing various Iranian parties and factions including members of the Communist Party of Iran, the People's Party (Tudeh), Fedayeen-e-Khalk and Howeyyat. MEK is also represented in the USA, Germany, Italy and Canada.

The leaders of the organization are Massoud and Maryam Rajavi, who live between Washington, Paris and Baghdad. They have over 4,500 gunmen under control, most of them are situated in Iraq.

The organization appeared at the end of the 1960s. It was founded by students - sons and daughters of Iranian vendors who were protesting against the Western influence during the shah's rule.

The ideology of the organization evolved into the anti-Western blend of Marxism and Islamism. The organization became a terrorist group very quickly. The group was struggling against the rule of the shah and his American masters.

During the 1970s, Iranian Mujaheddins killed several American servicemen and civilians that were helping the shah. In 1979, they took part in the attack against the US Embassy in Teheran.

No one denies the existence of pro-Iranian groups such as Hezbollah. As for Iran, the position of this country looks more honest than that of the West. Unlike Western countries, Iran is not trying to conceal anything under the guise of democracy. As for the West, it seems that Western countries have good and bad terrorists.