Tokyo Electric Power Company (TEPCO) has confirmed that 11,500 tonnes of radioactive water, one hundred times over the legal limit of radioactivity, have been dumped into the Pacific Ocean. Worse still, the radioactive core of one of the reactors appears to be leaking. 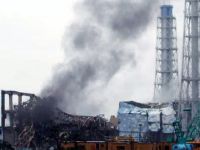 The company has explained that the water was dumped into the ocean so as to leave space to transfer even more highly radioactive water which has built up in Reactors 1,2 and 3. More worryingly, the company has confirmed that radioactive water is leaking into the sea, probably from a 20-cm crack that has appeared in a concrete well under Reactor 2.

The Japanese Government's chief spokesperson, Yukio Edano, has declared that the cumulative effects of the radioactive leakage "will have an enormous effect upon the Ocean if the leak is not stopped as soon as possible". Samples of seawater taken from the sluice gate to Reactor 2 were 7.5 million times above the legal limit for radioactive iodine on April 2; this had dropped to 5 million times by Monday. Readings some hundreds of metres out to sea showed a reading 1,000 times the legal limit.

Vegetables in the area show twice the legal limit of radioactive contamination. TEPCO has tried and failed to stop the leakage using a special type of polymer. Now the company has injected a dye to see exactly where the water is travelling from and to, then intends to repeat the exercise.

What is the status quo?

Reactor 1 has a damaged core, the building was damaged by a gas explosion and radioactive water has been detected in the reactor, in the basement and in groundwater nearby.

Reactor 2 has a damaged core and was also damaged in the explosion. Radioactive water many times above the legal safety limit has been detected in the reactor and in the tunnel under it, while a crack has appeared in a containment pit.

Reactor 3 has a damaged core and the building was damaged in the explosion. Radioactive water has been detected in the reactor and basement and there is possible damage to the containment pit.

The Japanese authorities have said that the radioactive material should disperse easily in the sea, and that people outside a 19-mile (30 km) exclusion zone run no risk of contamination. Meanwhile 1,400 schools and nurseries are being tested for radiation contamination.