World goes back to pre-war condition of 1939 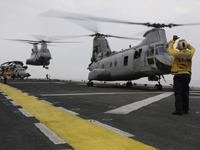 NATO is significantly increasing its military presence in the Black Sea basin. According to the head of the European Command of the Armed Forces U.S. Admiral James Stavridis, U.S. Marine Corps will expand its activities in the Black Sea region.

According to the official version of Stavridis, who, incidentally, at the same time holds the position of Supreme Allied Commander (OER) of NATO in Europe, the increase in the number of U.S. Marines is due to the need for training of the allied forces for their further deployment to Afghanistan.

According to Stavridis, in 2011 the U.S. has planned various kinds of interaction with as many as 14 Black Sea region countries, to include the preparation of the Armies of partner states for deployment to Afghanistan and training their sergeant staff.

However, he did not specify which countries he had in mind. Even if we were to include Moldavia in the list of the countries of the Black Sea region, there would not be as many as 14 states. Russia, Ukraine, Romania, Bulgaria, Turkey and Georgia have full access to the Black Sea.

The interaction with the Russian side is obviously not planned. Perhaps, Stavridis had in mind the countries of the Black Sea Economic Cooperation that include Armenia, Azerbaijan, Greece, Serbia and Albania? In this case we have only 11 potential partners of America in the region. Moreover, Armenia and Serbia are reluctant to send their troops to the Afghan war.

Stavridis may have included Poland to the list of the Black Sea region countries. According to his confession, along with two Georgian battalions, his subordinates have prepared a couple of Polish brigades. Given the old dream of the Polish elite to be stretching "from one sea to another," it is clearly not opposed to be among the Black Sea region countries. Yet, this does not give an exhaustive answer about Washington's plans in the region.

Even more questions arise concerning the preparation for the Afghan operation. First, the Georgian military will be prepared for operations against the Taliban not in Afghanistan but at home, although the terrains of the two countries differ markedly.

Second, according to Stavridis, the parties have already commenced joint exercises. In the course of the exercise the forces of the U.S. Navy practiced the use of unmanned aerial vehicles that ran on board the ships, and other maneuvers. A key role was played by warships that clearly practiced strikes at the coast. It also seems a bit strange, because even if they wanted, they would not be able to send the fleet to Afghanistan.

At the same time, the Royal Marines of the British Royal Navy are conducting strange trainings with their Ukrainian counterparts near the main base of the Russian Black Sea Fleet.

The trainings are held in the Old Crimea, at the base of the Black Sea Marine Corps training center of coastal defense troops of the Ukrainian Navy. According to the legend of the maneuvers, they represent "workshops to share experiences in carrying out peacekeeping missions."

What are the real objectives pursued by NATO countries in the region? A captain of 1st rank, 1st Vice-President of the Academy of Geopolitical Issued answered this question for Pravda.ru: "The Americans, in addition to the preparation of cannon meat from the satellite countries for participation in the punitive operations against Afghanistan, are preparing for combat action in the Black Sea area.

This time it will no longer be a local conflict like the war of 2008, but a large-scale war. It suffices to recall the statement made by head of the Academy of Military Sciences Gareev on March 26 where he touched upon this topic.

In addition, this same conclusion can be drawn from the available data on building groups of NATO in the Black Sea basin and at Russia's western borders. The U.S. is starting to deploy new military bases in Poland and upgrade existing ones to receive a much larger number of troops.

The fact that the British, with the approval of our Ukrainian brothers, are honing the skills of warfare in the Crimea near Sevastopol, too, speaks volumes. These are the links of one chain, because since the establishment of the Rockefeller, International oligarchic capital has adopted a common policy of aggression against other countries.

In fact, if we draw historical parallels, the world is in a state of 1939, i.e., before the start of a global war, whose precursor is the aggression of the U.S. and its satellites against Iraq and Afghanistan, and this time against Libya. The only question is when this "Black Sea Libya" happens.

It is not that the Americans and their European satellites are the bad guys, it's just that the prosperity of their economies depends on the control of the world's raw materials resources. In a crisis, they have no other choice. With regard to the outbreak of the conflict with Russia, there are more than enough reasons for it."

For example, the Georgian scenario may be played out again, or the Libyan scenario may be attempted as well. The West is very sensitive to terrorist groups operating in the North Caucasus. A look at the western press is sufficient to understand how these events are covered. After another successful raid carried out against militants, NATO can submit a voice in defense of the "revolutionaries and guerrillas," and further continue to operate under the planned scenario.