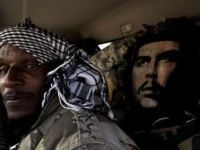 The Vatican has confirmed that the coalition forces in Libya have murdered forty civilians in air attacks against the Libyan capital city, as the government forces continue to fight bravely against Al-Qaeda elements supported by the USA, UK and France. A civilian building has been struck. Mizda hospital targeted as Belgium joins the fray.

Giovanni Innocenzo Martinelli, the Apostolic Vicar in Tripoli, the highest representative of the Vatican in Libya, has confirmed government reports that forty civilians have been massacred by NATO aircraft in the capital: "The so-called humanitarian incursions have killed tens of civilians in certain neighbourhoods in Tripoli," he said. "I have gathered diverse statements by trustworthy people, specially in the neighbourhood of Buslim, where a civilian building has collapsed, causing 40 deaths," he added in declarations to Fides, the Vatican news agency.

The Canadian General Charles Bouchard, commander of the NATO operation, has declared that NATO will investigate the claim but also pointed out that the incident took place before control was handed over to NATO by the USA.

"It is true that the bombing seems to be quite precise but it is also true that when they hit military targets in the middle of civilian neighbourhoods, the population is involved," said Martinelli, who confirmed that the Hospital of Mizda has been hit.

Now, if NATO claims that its weaponry is so precise and that it is taking great care to avoid civilian casualties, then one can only surmise from this that the Hospital at Mizda was targeted. Even if it was not, what have air strikes to do with enforcing a no-fly zone?

Belgium joined the clique of nations supporting Al-Qaeda operationals in eastern Libya today, conducting a terrorist raid against military equipment on the ground, destroying a Libyan aircraft. Given that the aircraft was not flying, why the attack? And what do the people of Belgium feel about the total cost of the mission - around one million Euros - of their taxpayers' cash?

Al Qaeda and Benghazi rebels one and the same thing

Abdel-Hakim al-Hasidi, the rebel leader, is an Al-Qaeda terrorist. In an interview with the Italian newspaper Il Sole 24 Ore, he affirmed that he had recruited men from Eastern Libya to fight against the Americans and British in Afghanistan, and admitted further that some of these men were now drafted back in Libya by Al-Qaeda to fight against the government forces of Al-Qathafi.

So now Belgium also lends its support to Al-Qaeda operationals alongside allies the United Kingdom and the USA.