Syria: "There is an ongoing sabotage scheme against the country" 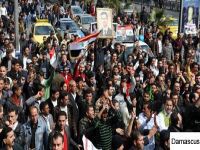 The Political Secretary of Communications for the president of Syria, Bouthaina Shaaban, said on Saturday (26) that "it is clear that there is an ongoing plan of sabotage against Syria, whose main target is the model of coexistence in the country. This scheme is not new," said Bouthaina, adding that "Syrians are aware of these plans of sabotage and will overcome them."

A government official on Saturday made a summary of the events in Sanamein last Friday, explaining that a group of armed men went to the police station to steal weapons, then headed for the same purpose to a security checkpoint. Finally, they went to the quarters of a military security force, opening fire on police guarding the building, "which required an armed response from police," Bouthaina affirmed next.

In Lattakia, an armed group spread terror and destruction in the commercial center of the city, burning and vandalising a line of shops until a policeman intervened. After hours of destruction, one of the armed protesters killed two security force members and one of the peaceful demonstrators who were marching.

A government official said the right of protest of Syrian citizens are guaranteed by law and that the government only takes action against those who seek to spread armed insurrection and the destruction of security and stability, thereby jeopardising the lives of citizens of the country.

Bouthaina stressed that Syria will stand firm against those that violate the security and stability of the country, saying that most Syrians "jubilantly welcomed the announcement of reforms ... We keep close to the people and will carry out their wishes as a government," he concluded.

Crowds take to the streets

Last Friday (25), the country's capital, Damascus, and other provinces witnessed large marches held for a second day in support of economic and political measures enacted this week by the government of President Bashar al-Assad and also on behalf the unity of the country.

The protesters expressed their rejection and condemnation of what they called "a foreign organised campaign, which targets the security, stability and national unity of Syria."

In Damascus, protesters marched in downtown and on the outskirts of the city. The participants in the demonstration, with slogans and posters, showed their support for national unity and security and the stability of Syria, in the face of foreign plans that target the pan-Arab Syrian authorities.

In the province of Hama, citizens took to the streets after Friday prayers in marches condemning the foreign media campaign against Syria and its stability.

In Deir Ezzor, marchers took to the streets to express support for the unity of the people of Syria while warning that pro-separatist attempts are futile in the country.

Several marches were also seen in the cities of the province of Homs, all of whom expressed support for national unity and against the chaos that threatens their security and stability.

Marchers also took to the streets of cities in the provinces of al-Hasaka and al-Qamishli. The province of al-Raqqa also witnessed peaceful marches in support of the government and President Bashar al-Assad.

Aleppo, Sweida, Tartous and the released city of Quneitra were also busy with marches in favor of the unity of the country.

The marches also coincided with demonstrations carried out in Dara'a, Homs and Lattakia, who demanded more political reforms and to demand the government fight against corruption.

With information from Vermelho and SANA news agency