Protesters against Obama have heads shaved in prison 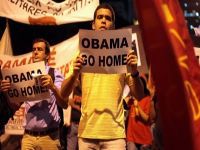 An arbitrary imprisonment in Rio: "What is happening is simply unbelievable. Not because they are still prisoners," affirms Anderson Bussinger, of the Human Rights Commission of the OAB-Rio de Janeiro, who follows the case. Among the prisoners arrested for "threats to Obama," is the "Tricolor Grandma," 69 years old. After a Molotov cocktail was thrown against the consulate, she was grabbed, along with 12 others that barely heard the sound of the exploding device, Diário da Liberdade.

On Friday, the 18th, following a protest outside the U.S. Consulate, 13 people were arrested. After spending the night in jail, nine men were taken to the Ary Franco prison, where they were forced to have their heads shaved. The image recalls the pictures of political prisoners in Guantanamo Bay, the U.S. base in Cuba, marked by the utter, absolute disrespect for human rights.

"We are seeing the situation repeated here in Rio. Due to Obama's arrival, innocent people have been imprisoned since Friday. They are political prisoners of Cabral and Dilma," protests Cyro Garcia, president of the PSTU party that has 10 militants in the prisons. 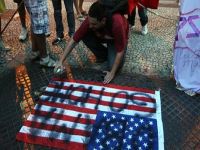 "What is happening is simply unbelievable. I do not understand why they are still imprisoned," says Anderson Bussinger, of the Human Rights Commission of the OAB-RJ, which follows the case. In fact, it is difficult to suppose that the youngest, the 16 year old, still remains in a Screening Center on Governor's Island. Or to find the reasons that made the judge on duty to consider that Maria de Lourdes Pereira da Silva, 69, should pose a threat to the U.S. president and his entourage.

The lady, who is also known by Fluminense fans as the "Tricolor Grandma" for her game attendance, was passing through downtown Rio on Friday when she agreed with the reason for the protest and joined the group that said "Obama, go home." After a Molotov cocktail was thrown against the consulate, she ended up arrested, as well as 12 others who only heard the sound of the exploding device before police advanced. Since Saturday morning, she shares a cell in Bangu 8 with an art student and a professor at UFRJ (Rio de Janeiro University), who were in the demonstration, and another inmate.

On Sunday, shortly before Obama's arrival at the Municipal Theater, a march of 800 people approached the street on the sidewalk, demanding the release of the 13. Many friends and relatives of the prisoners were there. Cirlete Proença, who has a couple of children in prison, spoke, and moved, even compared today to the days of the military dictatorship. 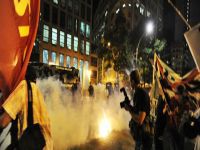 The arbitrary arrests sparked many gestures of solidarity. The sweltering heat on Sunday did not prevent the presence of lawyers Marcelo Cerqueira and Antonio da Silveira Modesto, two symbols in the defense of political prisoners during the military dictatorship. Modesto, 84, was once kidnapped by the DOI-CODI and is the author of the Amnesty Law. Lawmakers, including Senator Lindberg Farias, of the PT, have also shown support with a public statement.

On Monday, at 11am, a demonstration will be held on the Fundão campus of the UFRJ, for the freedom of the prisoners, and will be attended by lawyers and professors of the Faculty of Law. The campaign to free the 13 also hit the internet. An online petition has received almost five thousand signatures in just two days and a cartoon by cartoonist Latuff is being replicated in sites and social networks around the world.

PSTU lawyers are preparing a new request for freedom, now facilitated by the end of Barack Obama's visit. "But we do not want just their release. It is necessary that the charges be dropped, so they are not imprisoned in the future. It is no crime to participate in or organize a peaceful protest," says Cyro Garcia.