Hitlerites, Luftwaffe on the move 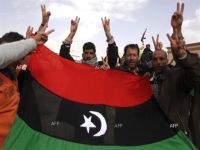 Before western powers invade Libya and get hold of their oil, pusillanimous leaders allow foreign intervention, since the uprising failed.

The "civilians" subservient to the owners of the world display their "harmless" tanks. Since they failed, the great powers are going to send bullets by land, air and sea.

I do not know what will become of Libya in the coming hours. I deeply regret that pusillanimous governments sitting on the UN Security Council have given in to pressure from France, England and the United States by adopting a resolution that allows all, including military intervention, to the delight of the Western decadent and shameless "men" of arms.

Speaking of a no-fly zone is nonsense, it is an understatement typical of someone who hasn't the slightest modesty and thinks they have some divine mandate to stick their big nose in another country, especially when this country, compared to others, possesses an immeasurable reservoir of oil.

Cursed, damned oil that rose more to a peak for the owners of the world with this fiasco of atomic energy in Japan, while fickle rulers are announcing to the terrified a brake on their nuclear programs.

The sad truth is that the world is in the hands of mediocre, incompetent, petty agents of economic interests, figures without shame, without commitments to their people, with not the least bit of public spirit or patriotism.

These puppets of the invisible dictatorship of the Zionist matrix are such frivolous things that deal with the world as if it was meant to serve their personal ambitions, representing a rude farce of short-term, that want to leave with a bank account stuffed with gold dust, ensuring an easy life for upcoming generations and a corrupt environment of debauchery, according to the model of the leader of Italy, the maniac pervert premier who does not exempt playing with little girls.

It is very easy for the rulers of these countries to decide to use their killing machines on weaker peoples. It will be difficult to determine how much each ruler pocketed to endorse the war intervention in Libya.

This planned aggression is the height of dishonest manipulation of what actually exists in truth there in Arab North Africa.

This civilian population is who? The crowd of generals and colonels who deserted with their arsenals of heavy weapons, tanks, planes and everything else that an army has the right to possess, the cannon fodder of war that were lured by promises of cash from Western powers? Want to check, go to Google images and search Libyan "rebels."

Why didn't this same Security Council give a hoot about the killings in Bahrain and Yemen? In both countries, as in Egypt and Tunisia, the opponents are not armed. There, yes, was the slaughtering defenseless civilians with the help of foreign troops. And yet, as the monarchy of Bahrain and the ruler of Yemen are offered to drink by the bosses of oil, not the media nor the hypocritical rulers of the West move a finger to help the civilians there.

They do not know, therefore, they are leading even more to further discredit and strip the vaunted "democratic" model. Democracy is what? Is it the rotation in power of surrogates of the same greedy private interests, all in the service of maintaining the perverse social pyramid, this subjection of the world to the Zionist hegemony that is central to the invisible dictatorship that rules the world?

What makes Obama the exponent of the last generation of cynicism and political fraud? What about Nicolas Sarkozy, killer of emigrants, a madcap who took money from Gaddafi for his million-dollar presidential campaign now engaged in a desperate file burning?

It may be that you are hopelessly poisoned by the media vulture, which uses diversionary epithets. That diverts the focus from reality, to immobilize the world before colonialist piracy. You may not realize the gravity and seriousness of the powerful countries attacking other weaker ones to take ownership of their wealth, as happened in Iraq, with that false story that Saddam Hussein was producing chemical weapons.

At this height, planes with high lethal power will be lined up at the Italian base at Cecília, if they have not already begun to punish Libya. It is what remains for the colonialist interests that funded the failed uprising and now they will drop the mask along with their deadly bombs.

Even so, it will not be an easy snap to conquer of the oilfields of Libya. Say what you will, but Colonel Muammar Gaddafi has shown incredible leadership over his people, courage, military expertise and, perhaps, will resist victoriously the foreign intervention with his internal friends.

Because a foreign military victory will be a blow that affects all sovereign countries, especially those who have oil, such as Brazil, Obama expects to capture them now without problems.

Plus, a look at the site Porfírio Livre to see scenes that the media does not show: Libyan soldiers, prisoners of the insurgents, being executed by terrorists posing as the innocent civilian population.