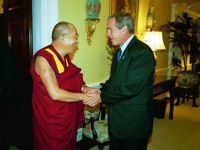 The Chinese government expressed skepticism at the announcement of the Dalai Lama to give up his political power to "freely elected" representatives suspecting that the Tibetan leader's words are "a trick to fool the international community."

The spiritual leader of Tibetan Buddhists, the Dalai Lama announced his intention to give up formal political power to "freely elected" representativesas as head of the Tibetan authorities in exile.

Speaking at the 52nd anniversary of the failed uprising of the Tibetans against China, the Dalai Lama, who lives in exile in India, said that the desire to "restore authority" has nothing to do with a desire to "evade responsibility."

"In the long term, it is for the good of the Tibetans. Not because I feel discouraged," he added.

In the Indian city of Dharamsala, where he lives in exile since 1959, the Dalai Lama said that in the next session of Parliament, Monday, he will propose "formally" to amend the constitution to make possible their desire to "transfer authority" to an elected leader.

A spokesman for the Ministry of Foreign Affairs of China, Jiang Yu, qualified the winner of the Nobel Peace Prize as a "political exile under the guise of a religious monk," and accused him of being "engaged in activities aimed at the division of China."

Jiang also stressed that the announcement of the political retirement of the Dalai Lama is not a novelty, since he openly mentioned this possibility in recent years. Jiang also launched criticism of the Tibetan government in exile, whom he described as "an illegal political organization not recognised by any country."

A spokesman for Chinese Foreign Ministry said that China will not change its policies on Tibet and will remain focused on the development and stability of this region. Communist troops from China occupied it in 1951. The government of China refers to this as an act of "liberation."

The chairman of the so-called Tibet Autonomous Region, Padma Choling, was against the proposed change in the figure of the Dalai Lama, ensuring that "the historic institutions and religious rituals of Tibetan Buddhism must be respected."

The death of the Dalai Lama in the future may spark further tensions between the Communist Chinese and the so-called "Tibetan government in exile." The president of the Popular Assembly of Tibet, Qiangba Puncog, said this week that the future death of the Nobel Peace Prize winner "may have little impact due to religious factors" and raised the possibility of "incidents" in the region.

The Dalai Lama said he would propose a constitutional amendment that allows him to relinquish his duties during the forthcoming session of Tibetan Parliament this month.

"Since the 1960s, I expressed that Tibetans need a freely elected leader for the Tibetan people to whom I can delegate power. Now, clearly it is time to put this into practice," said the Dalai Lama.