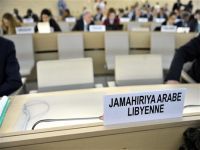 Libya must focus attention for the first week of the 16th session of the Human Rights Council (HRC) of the United Nations, with positions contrasting between the so-called West and the developing countries.

It is expected the Annual Report of the High Commissioner for Human Rights, Navi Pillay, will be read, and it is likely a speech by UN Secretary General Ban Ki-moon.

The United States and its allies in the European Union (EU) in general are in favor of expulsion of Libya from the HRC, one of the 47 members in the UN body, but lack a consensus, and there is opposition from other states.

In a declaration last Friday, the Cuban ambassador in Geneva, Rodolfo Reyes, spoke on behalf of his government for a peaceful and sovereign solution of the crisis unleashed in the Arab nation.

"We want that the Libyan people get a prompt, peaceful and sovereign solution to the situation that has been created there, without any interference or foreign intervention, when Libya is defending the integrity of the nation," Reyes said.

With regard to a special session held on Friday, the diplomat argued the disagreement of Cuba was with the inclusion in resolution 60/251 of the suspension clause of a state in said organism.

This clause would constitute a damaging precedent for cooperation on human rights and at the same time, open doors to those seeking to legitimise the exclusion mechanism to use it selectively against those who differ from their standards, he said.

Cuba also rejected any move that encourages foreign military intervention in Libya, and reiterated a call for calm to the authorities of that country.

In turn, China's ambassador, Wang Qun, said internal dialogues are needed so that it is possible to find a solution. Wang stressed that Beijing maintains the idea that there is still much to discuss on the possible suspension of Libya and that any action that is adopted would constitute a precedent.

The following are current members of the HRC and duration of their terms: