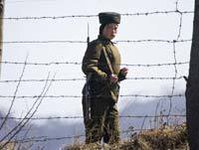 North Korea, rightly considered the most closed country in the world, might have had riots. According to South Korean sources, the army had to be used to pacify the people in the city of Sinuiju bordering with China.

No official information about the events in North Korea have been reported, therefore the South Korean newspaper Chosun Ilbo referred to its own source in North Korea. According to the source, the riots took place last Friday. They were provoked by a police raid at a local market and the beating of a merchant by the guards. The relatives of the victim stepped in to help him, but it resulted in a larger conflict.

Other people started joining the family of the beaten merchant. Their number has gradually increased to several hundred people. Among other things residents of Sinuiju complained that authorities have not provided them with increased food rations for February 16, when the country was celebrating 69th birthday of the "beloved leader" Kim Jong Il.

There is another theory of the events. Perhaps the riot was purely criminal in nature. Sinuiju market is one of the busiest in North Korea, and many local residents are involved in trade with China. Some are engaged in smuggling and illegal currency transactions. It is not ruled out that the government wanted to show the "new bourgeois" their place.

If we believe the sources of South Korean media, the police could not cope with the turmoil, and had to urgently call the elite army units. As a result, five people may have been killed. The number of injured is not known.

In addition, the newspaper Chosun Ilbo wrote that the unrest was not limited to Sinuiju. According to the sources, protests were also held in Jeonju, and two other cities. The people demanded the restoration of normal supply of food and electricity, which deteriorated greatly on the eve of the birthday of Kim Jong Il.

It is also possible that today the North Korean services began to experience difficulties with informants who previously helped to quickly identify trouble-makers. According to South Korean media, Kim Jong Il even created a special squad to quell the unrest. However, the South Korean media that do not have any sympathy for North Korea recognize that the country is still very far away from overthrowing the government according to the Egyptian model.

However, this does not eliminate the question about the stability of the North Korean regime. How likely is it that such riots could provoke mass unrest across the country and its further collapse?

Vladimir Khrustalev, an expert on Korea with Maritime State University shared his thoughts with Pravda.ru:

"The information about ongoing developments in North Korea has not been proven yet. Nobody knows exactly what happened there. The North Korean regime itself is rather closed. We learn about the events in North Korea, for the most part, from the South Korean media that depicts the situation in the light favorable to them. Now Lee Myung Bak's regime is trying not to miss any chance to strike a new blow to its northern enemy under psychological warfare waged against the DPRK. They use every opportunity they can.

For example, they frequently mention that the army was engaged to disperse the protesters. Yet, we should not make these far-reaching conclusions. First, the army units are stationed in the DPRK in every city. The following situation is also possible: an order was given and several truckloads of soldiers arrived to the scene to assist the police. They may have beaten the protesters with rifles and fired in the air. Several people may have been killed in a fight or in an attempt to obtain weapons. Additionally, DPRK does not have classic police units with special means to disperse riots using relatively mild methods.

So far I do not see any politics in these events. Most likely, this is not much more than just another "market happening." Let me remind you that the events occurred in the city bordering with China, whose many residents live off smuggling goods from this country, shuttle trading, etc.

It is not ruled out that the police have once again tried to bring "order" to the markets, and people were against its "tyranny." Fights and brawls in the markets in the 2000's have become quite common. It was probably the largest of such incidents. But it is too early to draw conclusions regarding what exactly happened there.

However, even under the most optimistic scenario for the regime of Kim, his situation slowly begins to deteriorate. Classical North Korean system of 1980s in general ceased to exist. The grip of the repressive system has weakened, the information isolation is destroyed, corruption appeared in the country, and so on. Significant role is played by the market trade, and not the ration supply.

With regard to the stability of Kim's regime, it is a mystery to everyone. Is he loved in the DPRK? From the Western point of view, there is nothing to be loved for. However, the situation in the country cannot be looked at this way. The mentality, the views on justice, etc. are very different in North Korea.

Yet, despite the fact that Pyongyang that has historically betted on its own development under the so-called idea of "Juche", it cannot ignore the trends in the global economy. It was also hit by the world resource crisis, which raised prices for energy and food. Accordingly, the life of ordinary people has worsened, and there are no special opportunities for its dramatic improvement.

Therefore, such events will likely happen. As long as there is no precise information, we can only wait until it becomes clear what has happened. And if this is really true, then the situation in North Korea is even less stable than commonly believed. However, it is too early to draw conclusions ".

However, despite this, China has growing concerns about the development of the situation in this country. China does care what the transformation of the North Korean regime will be like as it possesses nuclear weapons. It is in the interests of China that this process is developed as "quietly" as possible, because aggravation on the Korean Peninsula is not good for it and can cause serious harm to China's economy.

In this regard, experts do not rule out "blitz" Chinese intervention, whose goal would be to outrun the South Koreans. Pyongyang is seriously afraid of this, and it is not an accident that the Army Corps are being deployed on the border with China.