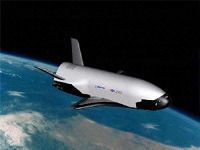 The Christian Science Monitor set out its concerns about Russia's efforts to create competition for the US Boeing X-37B unmanned spacecraft.

"Russia's reviving space industry might be working on its own version of the US Air Force's reusable unmanned space plane. After all, Russian space experts seemed surprised, a little alarmed, and possibly in awe of the American X-37B when it was successfully flight-tested from Cape Canaveral Air Force Station on April 22," the newspaper wrote.

According to The Christian Science Monitor, "the Kremlin nowadays identifies successful space projects as key to boosting Russia's international prestige and has spent a lot more money on the once-moribund space industry."

The Americans were intrigued by the "tantalizing hint" dropped by the head of Russia's Space Forces, Lt. Gen. Oleg Ostapenko. "Something has been done along these lines, but as to whether we will use it, only time will tell," the official said.

Some foreign military experts said that Ostapenko's remarks were simply a PR stunt, because the official had not demonstrated anything to prove his words.

"What did the Americans test under the guise of X-37B spacecraft? Was it a space element of the nation's missile defense system or was it an aircraft to destroy space satellites?"

"In spite of the fact that it is a top secret program, I can assume that it is most likely a multipurpose space plane. I think that destroying satellites is just one of its other possible combat tasks. The Americans are perfectly aware of the fact that if an enemy loses at least some of its navigation, intelligence, communication and other satellites, it can guarantee 50 percent of victory. Without satellites, enemies becomes blind, deaf and helpless.

"Why do I think that it is a multipurpose vehicle? The Americans already have anti-satellite weapons. A modification of the F-15 fighter jet was specifically designed to destroy satellites. It is also possible that such vehicles can be used as elements of the missile defense system to strike global blows on surface targets. There is one thing clear: the X-37B is a platform that can be adjusted to American interests."

"For whom does this weapon pose a threat in the first place?"

"For China, first and foremost, and for Russia too. As for China, the Americans missed the moment when the Chinese dragon began to grow. Now the Americans are looking for various technological solutions which could ensure global predominance for them prior to the imminent struggle for the markets of raw materials. The Chinese did not miss the danger. They have started developing their own space weapons, including anti-satellite systems."

"Unfortunately, Russia has lost many of its developments during Boris Yeltsin's presidency. We had many of them during the 1970s. For example, Mikoyan's design bureau was working on a hypersonic spacecraft capable of striking surface targets and spending a lot of time in space. At the end of the 1970s and in the beginning of the 1980s, the USSR conducted several tests of that manned space plane. Several tests were conducted, and they all finished successfully."

"Problems did. First off, our administration succumbed to America's pressure, which proclaimed the programs of strategic defense initiative, star wars strategy, etc. As a result, we agreed to demilitarize space in spite of the fact that we had the technology, which the Americans did not have during that time. During Yeltsin's presidency, Russia shelved nearly all perspective defense projects. For example, in 1993, we scrapped the successful space shuttle Buran program."

"Will Russia be able to respond to the USA's challenge now?"

"It does not look like Russia is going to launch the vehicle similar to that of the United States. Russia considerably undermined its scientific potential during the times of democratic reforms. However, the situation does not look that hopeless nowadays. We can particularly reanimate the idea of nuclear-powered spacecraft. There was also a project to launch nuclear warheads into space to strike satellites and other spacecraft of potential enemies with the use of electromagnetic impulse.

"In addition, Russia has reanimated the version of the MiG-31M anti-satellite fighter jet. The interceptor aircraft is capable of striking satellites of a potential enemy when they reach a certain orbit. That is why no one, including Americans, can guarantee security to their satellites," the expert said.