USA to deprive Russia of all strategic nuclear arms? 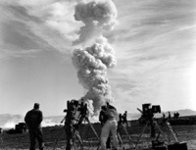 Slowly but surely, Americans are squeezed the "nuclear club" out of the weakening hands of Russia. After the ratification of START-3 on the reduction of strategic nuclear weapons, Obama is going to come to grips with tactical nuclear arsenals.

A tactical nuclear weapon (TNW or non-strategic nuclear weapons) are ammunition designed to target large objectives and enemy groupings at the front, including those well-fortified.

Why are the Americans so worried about the presence of Russian tactical nuclear weapons? According to them, due to the relatively small size, it is easier for terrorists to get to them than to strategic weapons. However, this is not about terrorists. Back in late December of 2010, the Assistant Secretary for Verification, Compliance and Implementation Rose Gottemoeller reported that the Russians have more of such systems than the US, and said that the Congress strongly recommended starting dealing with these issues. She added that the next step would be the reduction of tactical nuclear weapons.

The concern of the Americans is based on the fact that Russia has several thousand tactical nuclear weapons, while the U.S. has fewer than a thousand. However, Russia has its own claim to the States. A part of the US arsenal is still based in Europe. Moscow insists that Washington takes it out of there without any preconditions. However, the U.S. is hopeful that the Russians will ease their position and that negotiations will begin in late 2011.

After a consultation with the NATO allies, the U.S. would seek talks with Russia on an agreement to eliminate the disparity of stocks of non-strategic (tactical) weapons, but no later than one year after the entry of START into force, the president said.

It should be added that in late 2010 Barack Obama announced that his country was going to build a plant for processing uranium under the framework of the modernization of nuclear forces. In other words, Washington does not intend to weaken its attention to this issue.

As for the need to reduce tactical nuclear weapons, the Americans are burdened by the provisions of the START-3. President Barack Obama has sent a letter to the Senate, the contents of which cause doubt that the Americans are really ready to take Russia's opinion into account.

The START Treaty obliges each party to substantially reduce their nuclear potential seven years after its entry into force The number of carriers of intercontinental ballistic missiles (ICBMs) for ballistic missile submarines (SLBMs) and strategic bombers should not exceed 700 units. For warheads, this figure is 1,550 units and for deployed and non-launchers (PU) ICBMs and SLBMs, as well as TB, 800 units.

In addition, the annex to the START Treaty says that Russia reserves the right to withdraw from the document in the case if it feels that the deployment of the U.S. missile defense system at its borders poses a threat to Russia's security. Obama made it clear that he was strongly opposed to such interpretation saying that the U.S. will develop its missile defense, and that this does not pose a threat for Russia.

The U.S. policy involves continued development and deployment of missile defense systems to protect against threats from countries such as North Korea and Iran. U.S. is confident that these systems (ABM) do not and will not threaten the strategic balance with Russia. The U.S. is confident that the ongoing improvement and deployment of ABM systems does not provide grounds for questions about the effectiveness and viability of the START treaty, and will not be the basis for justifying the RF's withdrawal from the agreement, Obama believes.

In other words, the "peacemaker" Obama has the audacity to lecture Russia on the benefit of the treaty. If the U.S. fears North Korea and Iran, what prevents it to straighten out the relations with these countries? This does not necessitate placing missile defense at Russian borders. Additionally, these countries do not have and will not in the near future have missiles capable of hitting targets on the U.S. soil.

Obama started his latest address to the Senate by saying that the signed document does not oblige the U.S. to share the information on compliance with the terms of the contract with Russia. This looks like an attempt to find a loophole for non-performance of the contract or revise it on the terms favorable for the U.S.

Obama said that the new START treaty did not require the United States in any of the cases for the duration of its action to grant Russia the telemetry information, information concerning the launching of any missile interceptors, as well as launching of the existing intercontinental ballistic missiles and sea-based missiles listed in the eighth paragraph of the third article of the START.

With regard to tactical nuclear weapons, Russia indeed has a larger arsenal than the Americans do. It is understandable, because the Americans do not have to fear a serious escalation at their borders. It would be ridiculous to say that the faithful American ally in NATO, Canada, who is also the main raw material supplier to the U.S., would attack them. The same can be said about Mexico, which is a raw materials appendage of the U.S.

In Russia the situation is different. Many of Russian neighbors do not hide their hostility, and if they are not NATO members already they intend to become the members. It is no coincidence that the politicians of the countries of Eastern Europe often speculate on this, saying that such weapons threaten them. And they often turn to the U.S. and NATO for protection from the "Russian threat." Especially telling in this sense is the example of Georgia that in 2008 launched a war in South Ossetia.

Is it possible in such circumstances to talk about the reduction of tactical nuclear weapons at all? Pravda.ru asked military experts Pavel Zolotarev and Vladislav Shurygin to comment on this.

Such a straightforward statement of Obama says that Americans are confident that they can push their low-cost solution, because now our political leadership does not want any confrontation with the West and is pursuing a policy of appeasement of NATO. In addition, our government is a captive of its own illusions that the so-called military reform in Russia will create an army which will not be afraid of any enemy."

Deputy Director of the Institute of USA and Canada Pavel Zolotarev: "Such a statement is quite logical. Speaking of the intention to reduce strategic nuclear forces, the Americans immediately think about the tactical units. However, when the Americans tell us about the intention to reduce them, their intentions seem to be very strange. The essence of the American proposal is that we not only reduce our tactical nuclear weapons, but take out the rest from Europe.

That is, the United States removes it from someone else's territory, and we remove it from ours, behind the Ural Mountains. This approach seems, mildly put, rather strange, and it is unlikely that we will do it as is. For the Americans, withdrawal of their tactical nuclear forces poses no threat, while for us it comes with considerable costs. Moreover, our tactical nuclear weapons cannot be used against the U.S. even theoretically because of its small radius of action except for a scenario in which the Americans decide to fight us on our territory".

That is, after achieving great success in the disarmament of Russia, Americans are trying to move on. At one time the famous Otto von Bismarck predicted that Russia will be destroyed by its own folly. We have made one silly move already in signing the START-3. Now the Americans are forcing us to make another one so we get rid of our tactical nuclear weapons ourselves. Americans are not trying to hide the fact that after that they intend to make us implement the reduction of conventional "non-deployed" weapons stored in warehouses and storage bases. And when this happens, they will be able to have different conversations with us."